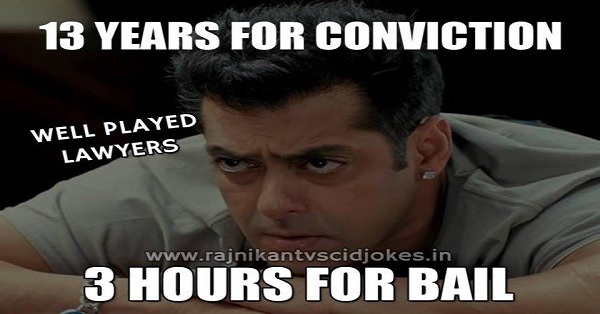 Hit and Run case on Salman Khan had been a sensation for years and finally the judgment is done. Resultantly, Salman Khan is proved guilty and is sentenced for 5 years. Naturally enough, this decision has made his fans sad while those who were more concerned with truthful judgment are happy with the verdict. Below are the 15 memes on Salman Khan Conviction that best describe the emotions of both types of people: Do you think Salman’s being sentenced for 5 years is apt and rightful punishment for the crime he had committed? If we throw a quick glance at what celebrities has to say with regard to the verdict, it is crystal clear that majority is in his favor, saying it’s not just to punish Salman for such a long period. Many are of the opinion that he is also a human being and can commit mistakes while others count good deeds done by him. As per them, Salman has done good to a number of people and he should not be punished so strictly just for one mistake. On the other hand, there are few people who seem to be contented with the decision.

What is your opinion regarding the whole matter? Are you in the favor of Salman or the one who died in the accident? Do you think Salman really deserves the tagline of Being Human or is he against humanity? Share your views in the comments…