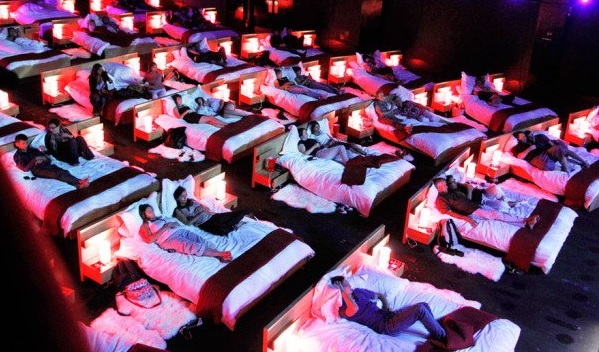 Although you may be satisfied with your regular visits to the nearby normal cinema theatres. But there is something you should think about next time. If you are planning or an abroad trip this year, you should surely take an experience once in some of the deadliest theatres around the world. They are extremely expensive but worth a single visit. These best theatres around the world can fetch you those happiness that you always wanted for with your life partner. Have a look with 15 best, beautiful and deadliest theatres in the world.

It is the largest cinema in Europe and is situated in Paris. It has fairy-tale decoration on sides of the screens and it also included water features. It is specialised in Hollywood and Disney production films, which is screened in French. It is a 3d cinema theatre with planetariums features in it. This has a complete slanted rood which should be experienced once and have a neck rest too. This is situated in Prizen, Kosaovo. It has an open screening in an open sky with Mountain River flowing under your feet’s. It is in Yao Noi, Thailand. Every year lucky contestants are chosen to celebrate film on rocks festival. Contestants are sailed with the boats between the islands. You will hardly pay any attention to movie, once you reach the beautiful place. This cinema theatre is situated in Madrid, Spain. This is an old designed infrastructure and was quilted first in 20th century. It helps us to be seated on car like booths with movie screened in front. While eating you can enjoy the movies from 1950’s and 1960’s. This is one of the best theatres in china , it has a private bar , VIP rooms and smoking zones in it.It has rooms which provides sofa , pillow , bed sheets to experience leisure and comfort. Tuschinski is situated in Netherlands, Amsterdam. The architecture has different styles mixed in it , and is considered to be one of the most beautiful theatre in world. This is situated in United Kingdom, and creates a perfect environment for movie. This is also among the top theatres in London. This is situated in Sydney; Australia. It offers a unique feature of screening movie under open sky near the river banks and a soothing atmosphere. This again offers a screening in open; it was built in just 10 days with the help of scaffolding, plywood and industrial fabric. This is situated between 50th and 51st street of Manhattan. It has aside stage for screening, which is much wider than any Broadway houses. This is situated in Dresden, Germany. This has an open screening on the river Elbe. There is much magnificent architecture behind the scenes. This is situated in Paris, France. It understands your comfort and provides you with seats and pulls away bed, perfectly made for couples.

This is in Bahria town in Pakistan, and has one of the beautiful architecture constructed. It is more like a luxurious hotel than a cinema theatre. Continue Reading
You may also like...
Related Topics:best theatres, theaters