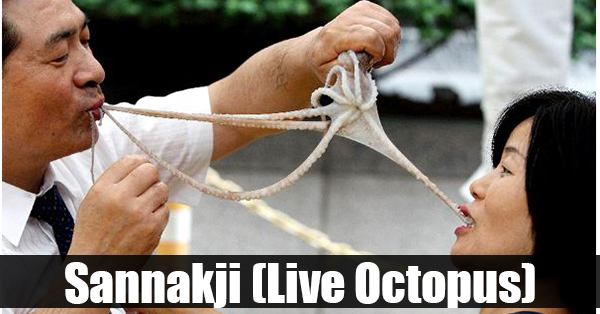 There are many international and national cuisines challenging each other due to the aroma and delicious taste they offer. While on the other hand, some countries are famed due to intake of extremely weird and worst cuisine. Can you think about eating a bull’s penis? Here we have encountered a list of the most worst and disgusting food in the world, which few people are sick of eating.

This cuisine comes from Korean country which contains of a small live octopus cut into small pieces and served immediately with some seasoning of sesame oil. This is a common cuisine in the parts of Asia and Jamaica where it is served in itself or some hot soup. It is also believed that Bull Pizzle contains the properties similar to Viagra. This is a Cambodian foodstuff where a palm-sized species of black spider is fried with some garlic, sugar, species and salt. Not to forget the legs are crispy and the body turns red. This is a Western Norwegian customary dish made from a sheep’s head.The skull is split into two and brain is soaked in water for couple of days with some salt preservation. The dish is cooked on special wood and boiled. A Balut is a developing duck embryo that originated from the Philippines and served as street food. The embryo is boiled and eaten in shell. The organs are peeled and then deep fried after being coated in flour, pepper and salt. This delicacy is served as an appetizer with a cocktail sauce dip in North America and Canada. This is a cuisine from Ireland where the meat is buried in a chamber after cutting into piece and then is left to decompose naturally for 2-4 months. A Blood pancake is a food from countries like Sweden and Finland where this savory is made with molasses, and you eat them with lingonberry jam. Baby mice wine is an established drink from China and Korea where Baby mice are taken from their mothers when their eyes are closed and immediately placed in rice wine when alive. They are then fermented in this wine and served as a healthy tonic. After drinking the wine, one is supposed to eat the dead baby mice. Casu marzu is found in the island of Sardinia where Sardinian sheep milk cheese is notable for containing live insect larvae. This is most popular in Cantor, a city in china where Chrysanthemum leaves and some herbs are sprinkled to add some sweetness and flavor to it. Tuna eyeball is commonly eaten in China and Japan where the eye of tuna fish is deep fried with some garlic, soya sauce and herbs.

Kiviak dish originated from Greenland and is made of little auks and is preserved in the hollow body of a seal. Haggis is a pudding made out of sheep’s pluck with some minced onion, oatmeal, suet, spices, salt and mixed with some stalk. Cockroach soap is completely made from cockroach and is a traditional dish from China. So, which one would you taste?