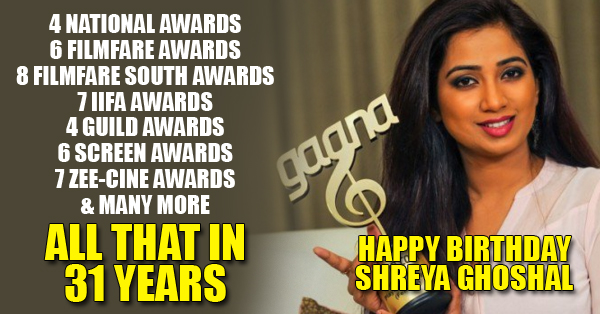 Shreya Ghoshal was born on 12th March 1984. She is considered as – one of the popular Indian playback singers currently.. Shreya started learning music at a very young age. She has also sung in different Indian languages thereby establishing herself as one of the leading playback singers in the industry.

1. Shreya Ghoshal started learning Music at the age of 4. 2. She is a Bengali, was born in Baharampur, West Bengal 6. Sanjay Leela Bhansali noticed her in that show and gave an opportunity in Devdas 7. With her Bollywood Debut (Devdas), she won a National Award & a Filmfare Award at the age of just 18. 8. Shreya Ghoshal has recorded more than 1000 songs in different languages. 10. She confessed that Sonu Nigam is her favourite singer currently. 11. In February 2015, she married her childhood friend Shiladitya Mukhopadhyaya. 12. Shreya is strict in selecting songs, she doesn’t select songs which have vulgar and double meanings. 13. In 2013, she was honoured at the House of Commons of the United Kingdom (UK) for her contribution to music.

It was the highest honour in London given to any singer from India. She was honoured by the U.S. State, Ohio whose governor Ted Strickland declared 26th June as Shreya Ghoshal Day. From the team of RVCJ we wish her a Very Happy Birthday..!!

Drop your wishes in the comments section below.

Open War Between Megastar Amitabh Bachchan & His Daughter-In-Law Aishwarya! Poor Abhishek
“I Have 13 Business Ventures & I Can Hire 15 Managers Like Sidharth Malhotra” KRK Lashes Out At Siddharth Malhotra