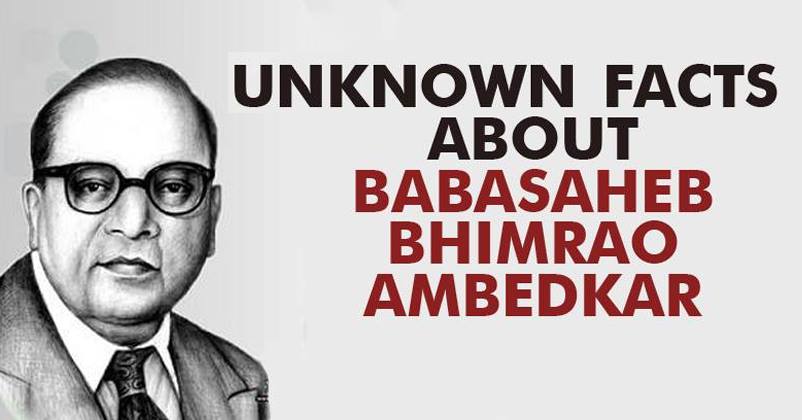 Ambedkar was born on 14th of April 1891 in Madhya Pradesh. He extensively campaigned against social discrimination of Untouchables (Dalits). He was the architect of the Constitution of India which came into effect on 26th January 1950. Ambedkar was very good at studies and earned various doctorates.

Here’s presenting you 15 facts you didn’t about the architect of India’s Constitution.

1. His full name is Bhimrao Ramji Ambedkar & his famously known as Babasaheb. 2. He was a social reformer, politician, economist, professor & lawyer 4. His Brahmin teacher, Mahadev Ambedkar, who was fond of him changed his surname from Ambavadekar  to Ambedkar 7. He was also the first Indian to pursue a doctorate in Economics abroad. 8. Ambedkar married twice, first to Ramabai and next to Dr. Sharada Kabir

His son from the second wife was Yashwanth. Ambedkar’s grandson, Ambedkar Prakash Yashwanth is the chief advisor of Buddhist Society of India. 9. He was the person responsible for reducing the Factory working hours from 14 hours to 8 hours. 10. He framed many laws for Woman Labors of India.

11. He resigned from the cabinet when the Parliament was unable to pass his bill to support Women & gender equality. 12. Reserve Bank of India has been adopted based on Ambedkar’s instructions only.

13. It took 2 years & 11 months time for Ambedkar to prepare the Constitution of World’s Largest Democracy. He is also known Father of Indian Constitution

Ambedkar has made research on various constitutions which were available at that time. But preparing a Constitution in just under 3 years is a great achievement. 15. In 1990, he was posthumously conferred with India’s highest honor Bharat Ratna Big Question Answered: This Is Why C Is Kept Small In McDonald’s, McDowell’s And McGrath
Every Man In This Village Has Two Wives. Reason Is Strange & Weird