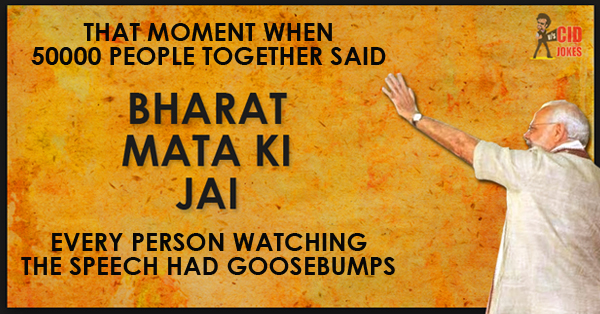 Modi rocked UAE!!! World witnessed something similar to what happened last year in US’s Madison Square. Indian Prime Minister Narendra Modi was on his two days tour to UAE. It was first time in 34 years that a States Head of India visited UAE. More than the Indians it was people of UAE who were excited about Modi’s Visit to their Nation. Modi on the second day of his tour visited Dubai where he had to address over Fifty Thousand people. The event took place in Sheik Zayed cricket stadium. The officials of UAE were shocked to see the number of people who made their presence to see Modi. They quoted that it was the first time they have seen such response from the crowd on arrival of any States Head. Modi had delivered 70 Minutes speech in which he picked some of the key achievements of the Modi Govt in one year. Here are the 15 key and hard hitting quotes gathered from that 70 Minutes of speech. 15. And That Moment Which Gave A Million Indians In India Goosebumps, When Those 50000 People Present In Dubai Together Said