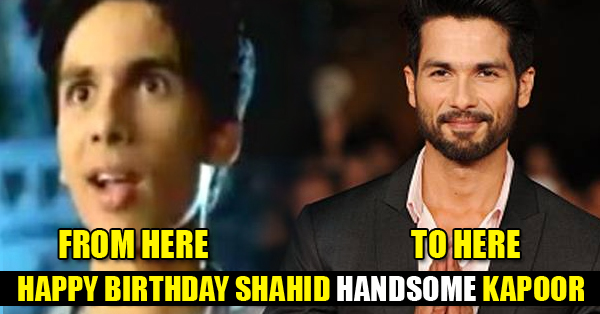 Shahid Kapoor was born on 25th February 1981 in New Delhi, India. Shahid is considered as the most attractive Indian celebrities in media houses. His parents Pankaj Kapur and Neelima Azeem were both actors, however, they were separated when Shahid Kapoor was three years old. After that, Shahid stayed with his mother and maternal grandparents, they moved to Mumbai when he was 10 years old.

February 25th, 2016 marks his 35th Birthday. So here we present you 15 Interesting and Unknown facts you didn’t know about Shahid Kapoor. 2. Shahid was a background dancer in the films Dil To Pagal Hai & Taal

3. Before doing a lead role Shahid was featured in TV commercials, Music Videos 5. Shahid accompanied his friend to an audition for Pepsi advt eventually, he became a part of it which feature SRK, Kajol & Rani Mukherjee 6. It took him 1 full year to get a perfect body for his film Kaminey 8. Shahid gave up eating meat after reading the book “Life is Fair” by Brian Hines 10. During his struggles, Shahid Kapoor said “When I bought my first car, I also wanted to buy a Pioneer music system for it but at that time I couldn’t afford it. Now they want me to endorse it.” 12. His favourite Actor is his father Pankaj Kapoor and favourite actress is Julia Roberts 13. He has been linked with many actresses in his career, starting from his first co-star Hrishita Bhatt, Amrita Rao, Priyanka Chopra, Bipasha Basu, Vidya Balan, Anushka Sharma, Sonakshi Sinha and Kareena Kapoor 14. He is known as the Chocolate boy of Bollywood Other Honours are listed below. Share your wishes for the Birthday boy in the comments section below.

Here’s All That You Wanted To Know About Sanjay Dutt & His Release From Jail.
These 14 Pics Of Actress Mia Uyeda Are Too Hot To Handle