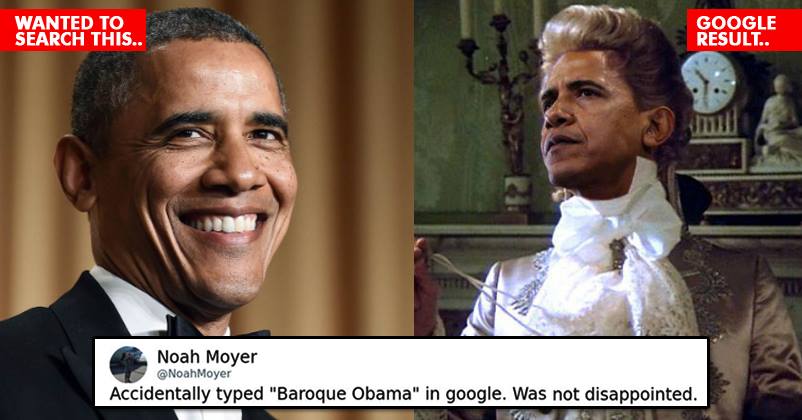 Grammar can seem like a jigsaw puzzle of letters and alphabets, it’s not always that you get the right word with the right spelling at one take. Mishaps happen and so do spelling mistakes, which actually is the most common mistake anyone could do. From a baby to an old wise individual, all have faced the repercussions of grammar and spelling mistakes.

But Google always has an answer to everything, from your silly questions and doubts to various curiosities, the best browser is in no way indifferent even to your spelling mistakes.

There must have been hundreds of moments when each and every one must have committed a spelling mistake, but Google has always made us feel good about it. Either it has made the suggestion of the exact word we are looking for or it has made us happy and laugh out loud with its hilarious results. There are certain search words in reality that are actually the results of spelling mistakes. Well, we don’t blame Google or you for this blunder-that-leads-to-wonder, after all Grammar is one of the trickiest nuts to crack.

Sometimes it’s good to make spelling mistakes, if not anything but we definitely get to see new stuff on the Internet. Thank God that Google isn’t the usual spell bee!

Well, here’s a list of some of those hilariously funny search words:

1. When someone accidently typed ‘Baroque’ instead of ‘Barack’! Well, we are pretty sure even Obama will see the funny side of this mistake.

Accidentally typed "Baroque Obama" in google. Was not disappointed. pic.twitter.com/IjSplGhLWV

2. Do you have a nerdy computer friend, well, gifting this ‘cpucake’ instead of ‘cupcake’ will be worth the expression on their face.

3. It looks so real that it wouldn’t be surprising if it starts barking anytime now. This is “Dog Bread” instead of “Dog Breed”

I was looking for 'dog breeds' in google but accidentally searched 'dog bread'…wasn't disappointed though. pic.twitter.com/K4isBINyk1

4. Woahhh! Now that is something really big, Tesla cat for a car, if the cat looks so cool then the car must be super cool!

Googled "Tesla car" because it was mentioned in a book I'm reading, but accidentally typed "Tesla CAT" instead…

I was not disappointed pic.twitter.com/JeEVPIC2ZX

5. This is some Fantastic Beasts coming to life! This is “Cat Owl” instead of “Cat Bowl”

Accidentally googled "cat owl" instead of "cat bowl"
Was not disappointed
😳😆😺🦉#FridayFeeling#BadJokeFriday pic.twitter.com/KiR6RtFE4N

6. Creativity best found in a spelling mistake, definitely worth searching for in real. Battle slippers instead of Ballet Slippers

I accidentally typed "battle slippers" instead of "ballet slippers" into Google images and I was not disappointed. pic.twitter.com/a5ywq56eo4

7. If you have a pet dog at home, well, this one’s for you. Corgi shorts instead of Cargo shorts. Happy shopping!

I googled 'corgi shorts' instead of 'cargo shorts' and it turned out fantastically pic.twitter.com/auMrWycVw9

8. Oh My God! That is definitely one of the best ships one can ever chance upon. Forget about cargo, let’s go for a ‘corgo’ ride.

9. It definitely gets the ‘biggest joke of the year’ award, nothing can beat this comical looking Ryan Gosling. Oops! It is ‘Ryan Goosling’ lol.

I accidentally searched "ryan goosling" instead of "ryan gosling" and I was not disappointed pic.twitter.com/gXWUtiLDlD

10. This one definitely tops even ‘Ryan Goosling’, in this laughter challenge ‘Ariana Gandhi’ takes the cup. lol.

11.That has to be one legendary ‘lemon’ to be counted as ‘Lennon’!

So I accidentally typed in John Lemon into google instead of John Lennon.. #johnlemon #johnlennon pic.twitter.com/3OqGrIg03V

12. Hey! No one can be mad at this cute thing, it is like hitting jackpot just that someone hit the wrong keys, like cat for an act.

13. Well, Google has definitely saved a few lamb’s lives from being stewed in a Lamb Broth!Truly siblings always know how to save you in any situation.

i accidentally searched for lamb brother instead of lamb broth and now i wanna die pic.twitter.com/Qieg3zN4M5

14. Whoever has done it, has definitely got some real skills there, even Hitler in his real life couldn’t have managed to look this ‘Hotler’ lol.

15. Well, this one’s really creative only if one would avoid using it on their dining table. But seriously that’s too big of a ‘Buttonhole’.

Accidentally Googled how to knit a butthole instead of buttonhole…. pic.twitter.com/BTzYerp7EV

Have you ever made such mistakes? Was Google funny with you too? Do let us know in the comments section about your funny experience with Google.

22 Celebrity Duplicates That You Won’t Believe Actually Exist
Sonam Wished Birthday To Fawad & Twitter Trolled Her. Haters Asked Her To Shift To Pakistan