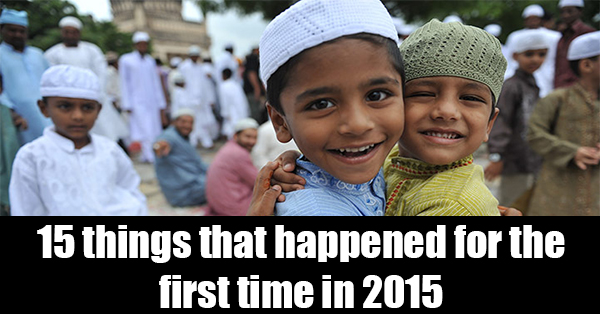 Its almost year end now.. Hardly 2 or 3 days remaining for 2015 to get over and everyone is busy making plans for New Year Celebrations & Outings.. Meanwhile lets have a look at 15 things that happened for the first time in 2015.. 2. Ireland finally became the first country to legalize sex marriage with 62% of people in favor of it. 3. SpaceX launched a rocket that returned to Earth and successfully landed upright. 4. During the Chennai floods , For the first time since 1878 THE HINDU was not published. 8. Karnataka Govt honored a transgender with the Rajyotsava Award, the second highest civilian honor of the Karnataka state for the first time. 9. Satnam Singh became the first Indian basketball player to be drafted by an NBA team. 11. An Indian mother posted the country’s first gay matrimonial ad seeking a groom for his son. 12. Cuba got Wi-fi connectivity for the first time when an artist set up the first Wi-fi in his studio. 13. India got its first 100% visually impaired officer in IFS. 14. A 28-year-old diploma holder in engineering made history by becoming the first female metro operator in Chennai. 15. The first transgender principal of a college in West Bengal and India.