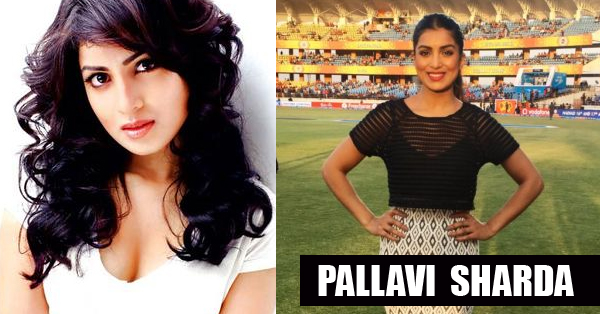 Indian Premier League popularly known as IPL is a professional cricketing league. IPL was founded by Lalit Modi, an ex-BCCI member. IPL is played by both Indian uncapped & International cricket players. IPL is known for its last over finishes, controversies, team owners, legendary players and much more. Apart from all these, IPL is well-known for its beautiful and glamorous anchors who engage fans even during pre & post match analysis.

For the last couple of years, Archana Vijaya & Shibani Dandekar did this job successfully but as they pulled this year, organisers have signed Rochelle Maria Rao and Pallavi Sharda. Rochelle has already worked in IPL for 1 year whereas Pallavi Sharda is a newbie in the IPL bandwagon.

So here presenting you 15 things you should know about the gorgeous Pallavi Sharda. 2. She is an Australian-Indian actress, host, and a dancer Both her parents are IIT alumni and have PhDs in science and engineering. Her mother, Dr. Hema Sharda is a Director of South Asian Relations at the University of Western Australia and father Dr. Nalin Kant Sharda is a Professor of Computer Science at Victoria University. 5. She holds multiple degrees, a LLB, and BA from Media and Communications. Pallavi also has a Diploma in Modern Languages (French) from the University of Melbourne 7. She shifted the base from Melbourne to Mumbai in 2010 to pursue a career in modeling 8. In 2010 itself, she debuted in Bollywood by playing a cameo in Karan Johar’s My Name is Khan which had SRK & Kajol in lead roles. 9. Next, she played a role of village dance teacher in the comedy film DusTola alongside Manoj Bajpai in 2010.

The film didn’t perform well at the box office but her performance was highly appreciated. 11. She was also seen in an Indo-American film “Walkaway” which was released across the USA in 2010. This play was directed by Shruti Merchant and choreographed by Bollywood’s famous choreographer Vaibhavi Merchant. 13. In 2013, Pallavi featured in her first Australian film “Save Your Legs” , where she played the role of an Indian girl named Anjali.

This was a cricket based film done by her. However, the film didn’t do well in terms of collections.

14. Her big Bollywood films include Ranbir Kapoor’s “Besharam” and Ayushmann Khurrana’s “Hawaizaada”, where she played the female lead.

Pallavi will be seen in the Hollywood film “Lion” later this year. 15. Pallavi Sharda confessed that she was highly nervous when she was shortlisted for the IPL anchoring role.

She also said that she is confident of doing the anchoring role. Let’s wish her all the best for her new role. Share your views in the comments section below.

This PhysicsGirl Can Be The Next Lady Einstein! Wouldn’t You Want To Meet Her? Check Out !
15 Creative Ideas Which Will Make You Implement Them At Your Home!!