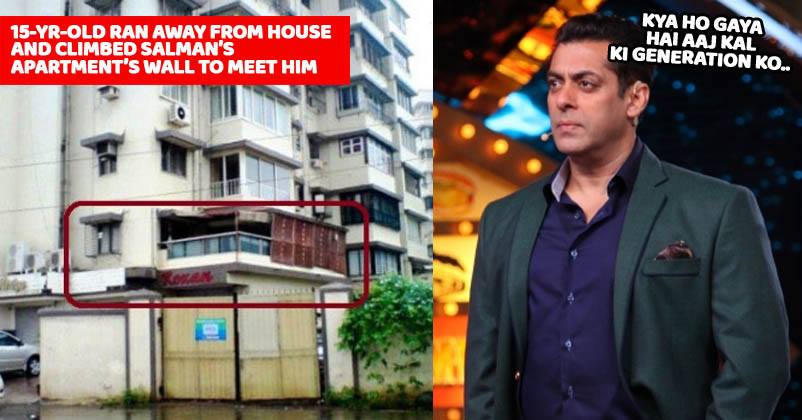 There’s something definitely wrong with the teenagers of today. On a regular basis, we stumble upon few heinous crimes done by teens such as blackmailing or raping their cousins or friends and this all undoubtedly trembles our soul from within.

Having a crush on a celebrity is one of the very common things that happen with teenagers; however, several kids take such extreme steps just to have a glimpse of their favourite star that they have to repent for it later on.

The same happened with a 15-yr Bhopal girl who allegedly climbed a wall and jumped inside the premises of Galaxy Apartment only to meet Salman Khan. It was on Sunday that she ran away from her house in Bhopal and reached Mumbai for a glimpse of her ‘childhood heartthrob’.

Cops revealed that she lives in Berasia and studies in class 9. On Tuesday at about 11AM, Mumbai police main control room got to know that a teenage girl trespassed Galaxy Apartment’s premises. When cops reached there, they took the girl to Bandra police station and sent her to Dongri children’s home subsequent to initial investigation.

In the course of inquiry, police came to know that parents of the girl lodged a complaint with Berasia police under IPC Section 363 for kidnapping on Monday.

Here’s what an official stated,

“The girl had left her house on Sunday evening and she arrived in the city on Tuesday morning. We believe that the girl instantly caught the long distance train and came to Mumbai.”

Since she already knew Salman’s address, she might have made it to his home in Galaxy Apartment after reaching Mumbai.

As per an official,

“The girl initially tried entering the building premises from the gate but she was stopped by the security guards. The girl said it was her dream to meet Salman Khan and requested them to allow her to meet him. The guards didn’t allow her to enter claiming that he wasn’t at home so she decided to climb the wall and meet the star.”

She went to a neighbouring building and trespassed Galaxy Apartment but someone caught her near the lobby and informed security guards. When guards reached the lobby, they identified her and police was informed. Cops have also found the girl’s Aadhaar card with her and this is what an officer said,

“During inquiry she said she was from Berasia, so we called and informed the local police about the girl as even they were on the lookout for the girl. We managed to get her parents’ contact number, and informed them as well.”

The girl’s medical check-up was conducted in Bhabha hospital and her parents are coming to Mumbai with few local officers.

This is definitely an insensible act on the part of the girl and there could be a threat on her life if police didn’t identity her and contact her parents.

YouTuber Shot 3 People At YT Headquarters & Then Shot Herself As YT Reduced Her Channel’s Views
Tyre Killers In Pune Are Removed Now. Is It Good Or Bad?