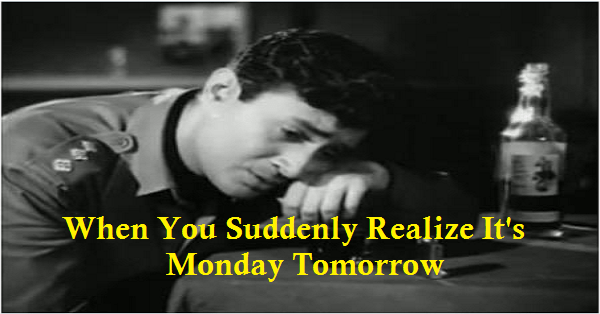 It is truly said that old is gold and vintage is always one of its kind, be it dress, appearance, hairdo, dialogues, expressions, love-making and whatsoever! Uniqueness discovered in vintage things is not to be easily and exactly found elsewhere; that’s why the era of 80s and 90s has its own charm and no time can steal or snatch its magic.

Have you ever wondered that vintage Bollywood pictures are so awesome that they have the ability to express everyday life situations from mother’s cooking ‘Lauki’ for dinner to being upset for tomorrow is Monday or girlfriend’s hangover from last night to your date’s farting mid-dinner, depression of not getting admission in Delhi University for scoring only 99% to the formula of beating the heat!! Sounds interesting, isn’t it?

No doubt, Indians are inseparably attached with Bollywood cinema and this ‘joint’ is not to be broken by any means. Take a look at these hilarious vintage images of Bollywood movies which brilliantly portray daily situations of life in the funniest way to make you ROFL. Apart from making your laugh hard, these will also full your dose of comedy for the day!!

When your girlfriend catches you with another girl pic.twitter.com/EVnTbqpwwU

When people find out that you're a guy pretending to be a girl on the internet pic.twitter.com/2oJ9ob9xkq

When bae is still hungover from last night pic.twitter.com/tfk5JF2rd4

When you take your bra off after a long day pic.twitter.com/WFJJcysJXZ

When a hot girl asks you for help pic.twitter.com/Lp3xQkPaBB

When you feelin' the heat pic.twitter.com/3tuJ2VS9yL

When mom says she cooked lauki for dinner pic.twitter.com/MTNUoGgmKf

When you get caught in bae's web of lies pic.twitter.com/XTXMfTbdCa

When you suddenly realise it's Monday tomorrow pic.twitter.com/kYxyov7Bx7

When you try telling your parents that marks don't matter. #CBSEResult pic.twitter.com/rDRgOJDHdl

When bae asks if she looks fat in that dress pic.twitter.com/RVk0OWB3UB

When your dream was Delhi University but you only scored 99% pic.twitter.com/tDCfSsx5ed

When the waiter says there's no Happy Hour pic.twitter.com/1LcTfQdRyQ

How did you find these illustrations? Simply superb and mind-blowing, aren’t they? Tag your friends who are caught in such similar situations and tell them that there is a Bollywood still for all of their situations! Which of these did you find the best and for which situation you want to have a picture that’s not mentioned here? Share your views regarding this article in the comments section below!