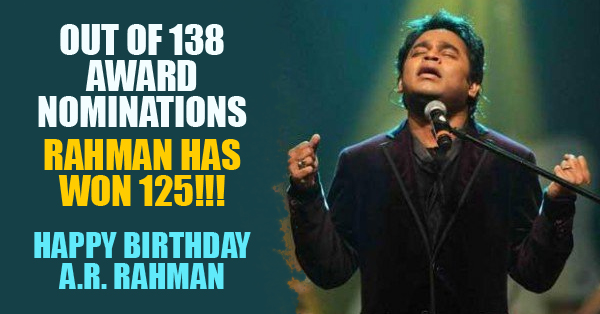 Allah-Rakha Rahman or famously known as AR Rahman was born on 6th January 1967 in Madras, Tamil Nadu. He is considered as the most talented composer and playback singer India as ever had. Even after reaching great heights internationally, he keeps in touch with the South Film Industry which gave him his first opportunity. January 6th 2016 marks his 49th Birthday.

So here presenting you 17 Interesting and Unknown Facts about the Music Maestro – A.R. Rahman..!! 2. He is a Composer, Music Producer, Singer, Songwriter, Musician, Philanthropist 3. In 1980 he made his TV Debut for Doordarshan in a children’s programme “Wonder Balloon” . He got popular by this show, as he used play 4 keyboards at the age of just 13. 4. Rahman left his School at the age of 15 because of poor attendance. He didn’t complete his schooling 6. He is also known for other names – ARR, Isai Puyal ( Musical Strom), Mozart of Madras 7. He shares his Birthday with his son Ameen 8. A street in Markham, Ontario, Canada, has been named in honour of AR Rahman in November 2013 10. In 2007, Rahman entered Limca Book of Records as “Indian of the Year for Contribution to Popular Music” 11. While everyone dreams of winning at least 1 Filmfare, Rahman  has won 15 Filmfare Awards & 14 Filmfare South Awards till 2014. 13. He is the first Asian to win 2 Oscars (Academy Awards) in the same year. 14. Signature Tune of Airtel, composed by ARR is the world’s most downloaded mobile music tone with over 150 million downloads 16. He has won 5 Honorary Doctorates, including from the prestigious Berklee College of Music Following are his other honours: Join us in wishing the Music Maestro a Very Happy Birthday. Share your wishes in the comments section below.

BAJIRAO MASTANI Crossed An Unexpected Mark On 3rd Weekend! Must Check Out
We Girls Should Never Be Embarrassed For Saying These 10 Things