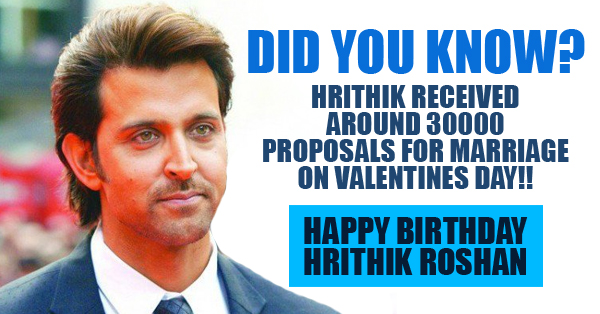 Hrithik Roshan was born on 10th January 1974 in Mumbai Maharashtra. He is considered as one of the most attractive male celebrities of India. He started his career as a child artist then worked as Assistant Director before playing the lead roles in Bollywood.

So here are 17 unknown and Interesting facts about Hrithik Roshan. 3. Hrithik also acted with Superstar Rajinikanth in the film Bhagwaan Dada in 1986

When I got stuck in dialogue,he'd purposely mess up n retake it 2 protect my confidence. #HBDSuperstarRajinikanth pic.twitter.com/Gjf7dyxXea

4. He worked as an Assistant to his Father Rakesh Roshan in the films Khel & Koyla 5. During his days as Assistant Director, he did all kinds of jobs like sweeping the floors, serving tea to the actors etc. 6. Hrithik Roshan suffered from a Stammering problem since his childhood, he also underwent speech therapy to overcome this problem 8. Hrithik stopped smoking after reading the book “How to Stop Smoking” 9. He is born with 2 thumbs in his right hand. Even though he considers it as lucky, he hides it in all his movies except in Koi Mil Gaya 10. Hrithik admits that he has crush on Madhubala & Parveen Babi 11. At the age of 21, he was diagnosed with Scoliosis (abnormal lateral curvature of the spine) . Doctors told him that he will never be able to dance again, fortunately that didn’t happen and is now a Super Dancer. 14. Hrithik’s first film “Kaho Na Pyaar Hai” has won a total of 102 Awards, it also entered the Limca Book of Records for winning most number of Awards for any Bollywood film 15. Uday Chopra and Hrithik are Best Friends in the Industry. In fact they went to same school and also attended same karate & computer classes. 17. He has also received the following Honours and recognitions We wish him a Very Happy Birthday. Join us by dropping your wishes in the comments section below.

17 Facts You Didn’t Know About India’s Music Legend – A.R. Rahman..!!
10 Struggles Of Being Far Away From Someone You Love