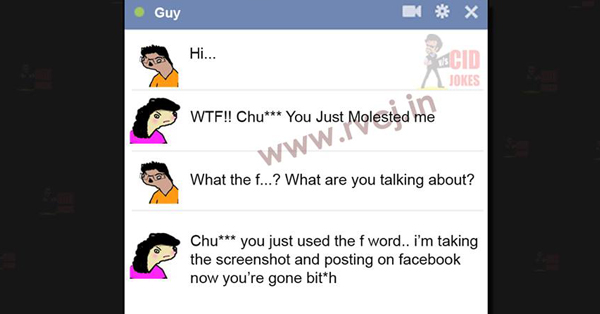 Two things currently viral all over Media these days are:

There are quite a few similarities in both these cases. Both the cases involves Women as the lead convict. There is a new twist in both the cases on a Daily basis. People are unable to judge whether who is right and who is not in both the cases. Phewwwww.. As you all Know Team RVCJ is in constant watch of the Delhi Eve Teasing case and even we are eager to know who is really lying. Whether it is the guy who is acting cool and calm or the girl who did whatever she could and still failed to get the response and trust of the people on the social media. Anyways the matter still has to reach the court and then it would be much more clearer on who is lying and who is not. Till then have a look at these 17 Memes on the Delhi Molestation Case which will definitely give you a good Belly laugh.

P.S. Team RVCJ is not judging anyone on basis of any statement and video and wish that the person who is wrong should be convicted and punished. 6. Situations Can get Worse Now 11. Situations Can Get Out Of Your Hands If Not Put To Halt 15. That Times Now Reporter With A Genius Brain Who According to you is Lying? Girl or Guy? Did the Guy really molest her? or is it a cheap publicity stunt by the girl just to get famous over the media? Comment your views in the comments box below and SHARE this post.

20 Memes On ‘RAKSHABANDHAN’ Every Sister & Brother Must Check Out!!
This Desi Thug Life Version Featuring Sarvjeet Singh Will Be The Best Thing You’ll See Today!!