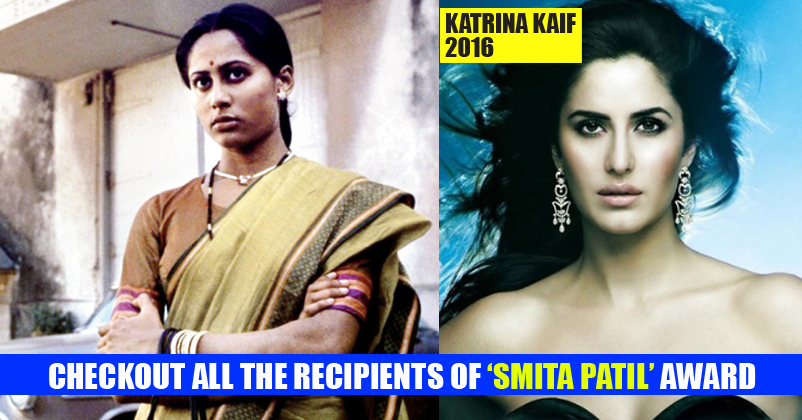 The Smita Patil Memorial Award is presented by the Priyadarshini Academy to recognize and felicitate the achievements of an individual in the Indian Film Industry. The NGO bestows this award bi-annually on 19th September to the best contributor. This year, they are presenting this prestigious award to Katrina Kaif. She has been trolled and questioned since then. Let us have a look at the previous recipients who received the Smita Patil Memorial Award. A popular actor and singer, Priyanka Chopra was felicitated for her valuable contribution to the Hindi Cinema. She is the most stunning and versatile Bollywood actress who has portrayed different characters in her brief career span. Vidya Balan was bestowed with the award for achieving success in a short time. She has given excellent movies like The Dirty Picture, Kahaani, Teen, Parinita, Paa, Ishiqiya and No One Killed Jessica. Preity has worked in several movies and has proved how versatile actress she is. Kal Ho Na Ho, Veer Zara, Kya Kehna, Chori Chori Chupke Chupke, Dil Chahta Hai, Koi Mil Gaya, Mission Kashmir and Sangharsh are some of the most promising movies she has worked in. Kareena received success in a short span of time. Udta Punjab, Jab We Met, Don, Omkara, and Chameli are some of her best movies till date. She has mostly worked in women-centric movies. She debuted at the age of 17 with Prem Qaidi in 1991. Aishwarya Rai Bachchan is a perfect combination of “Beauty with Brains”. Movies like Guru, Devdas, Sarbjit, Taal, Guzaarish and Jodha Akbar prove her one of the successful actresses in Bollywood. She is the topmost versatile actress of the Indian Film Industry. One can see her versatility in movies like Cheeni Kam, Chandni Bar, Virasat, Maachis, Maqbool, Astitva, Haider, Hu Tu Tu, etc. Manisha Koirala is one of the most talented actresses in Bollywood. Her work in Pardes, Dil Se, 1942: A Love Story, Khamoshi and Bombay are still praised. Sheshadri won the Miss India pageant in 1981. She is known for her noteworthy performances in films like Ghayal and Damini. Pooja Bhatt is a popular actress and producer. She has many excellent performances to her credit. Known as one of the glamorous actresses, Dimple Kapadia debuted from the film Bobby. She has worked in a number of hit movies like Saagar, Rudaali, Ram Lakhan, Janbaaz, Dil Chahta Hai, etc. The versatile actress began her career as a child artist in the South Indian Film Industry. She played a pivotal role in various blockbuster movies like Chandani, Chaalbaaz, Mr. India, Lamhe, English Vinglish, Sadma, Nagina, Khuda Gawah and the list goes on. The most celebrated actress of Bengali Film Industry, Roopa Ganguly played the role of Draupadi in Mahabharata. Deepika is still recognized as Sita, the role she played in Ramayana. She won millions of hearts with her versatility. She is a renowned actress and has worked in many popular tele-series and movies. She is still praised for her role in Jeevanrekha.

There are other deserving actresses too…

All these actresses have contributed their heart and soul to the Indian Cinema. There are other actresses too who deserve this award like Kajol, Rani Mukherjee, Juhi Chawla, Rekha, Shabana Azmi, Raveena Tandon and Sushmita Sen.

What do you think guys? Is it fair to felicitate Katrina Kaif before bestowing award to these deserving popular actresses? Share your views with us in the comments section below.

Finally The Release Date of Varun Dhawan Starrer Judwaa 2 Is Out
Ex Revenge Plan? Shahid Gets Notice From BMC For Breeding Mosquitoes As Vidya Suffers From Dengue