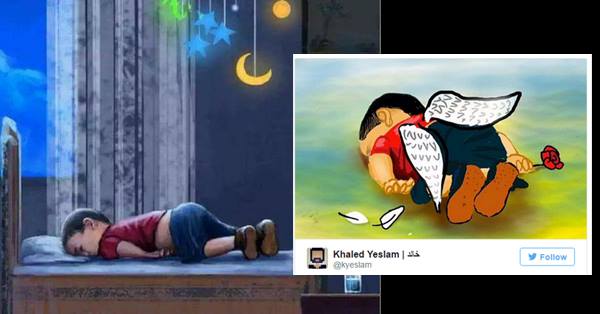 The heartbreaking image of a Syrian child lying dead on the shore of Turkish beach with his face down has not only ashamed the humanity but has also questioned the intention of International community whether they really want to solve the migrant crisis of that area or just showing off. The child was part of 11 member group who were attempting to get into Greece by travelling through Mediterranean sea as they wanted to leave war-ridden Syria.

The boy was wearing a red T-shirt and blue shorts, his name is said to be Aylan Kurdi and he belonged to Kobane, a Kurdish Syrian city, his elder brother Galip was found dead on the other part of the beach.

It is absolutely clear that the level of cruelty and harassment is Syria is so high that people are ready to take even this type of dangerous decisions. This is high-time that the persons concerned should now bring a solution to this problem as it has already taken up the lives of millions of innocent people.

As per the latest data published by International Organisation for Migration, this year almost 332,000 people have migrated to Europe, sadly out of which 2,636 have lost their lives on the way.

Artists from around the world have created heartbreaking cartoons to mourn the drowned Syrian kid and these are so pathetic that you will be drowned in tears taking a look at them:

#kiyiyavuraninsanlik One of Ummah's greatest political problems r rulers in Muslim world caring not for her affairs. pic.twitter.com/qFhuX11zEE

A picture paints a thousand words , and this came from a real image #KiyiyaVuranInsanlik (humanity washed ashore). pic.twitter.com/uzQ7BmcYls

We put him to sleep, and it's about time for us to wake up #HumanityWashedAshore pic.twitter.com/8LFf7tRy9V

The #Syria -n Child on Turkey's shores emerging as a symbol for crisis. Photo via @AdiKhair : pic.twitter.com/MqDpluH30q

“No one puts their children in a boat unless the water is safer than the land.” #KiyiyaVuranInsanlik pic.twitter.com/88iUnpajbK

This is how he should have been lying tonight. Safe. Warm. Alive. Europe didn't let him. #HumanityWashedAshore pic.twitter.com/7063kVPJMk Going To Watch “Welcome Back”? Read This Review & Probably You Change Your Mind
11 Brilliant Selfie Hacks You Never Even Heard Before