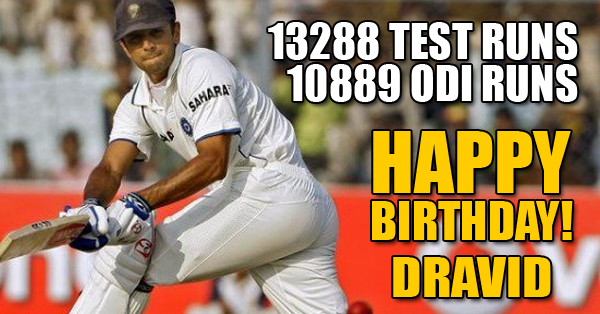 Rahul Dravid was born on 11 January 1973 in Indore, Madhya Pradesh. He is considered as the greatest batsman in the history of cricket. He was one of the key member of Indian Cricket Team from 1996 to 2012. He is the most respected Indian cricketer and also captained the National Cricket Team.

So here are 19 Interesting and Unknown Facts about “The Wall” – Rahul Dravid. 2. His mother tongue is Marathi. He was born in Indore and later moved to Bangalore 3. His father worked for Kissan Jam Factory which is known for delicious jams, this earned him the name Jammy . Later he also starred in Kissan Ad 5. “Jammy Cup” is a local cricket tournament at the school level in Bangalore named after the Legend. Man of the match gets ” Jammy of the Day” award. 6. Dravid played Hockey before taking up Cricket. He started playing cricket at the age of 12, he represented the state team at under – 15, under – 17 & under – 19 levels 7. Rahul Dravid made his Test Debut against England in Lords and scored 95 runs. He walked as soon as he nicked it to wicket keeper without waiting for Umpire’s call.

When a reporter asked why did you walk? He replied “Everybody in the ground heard the nick.” 9. Dravid has won 11 Man of the Match Awards in Tests, 8 of them in overseas Tests. 10. He has been involved in two 300-runs partnerships for the 2nd wicket, 331 with Sachin Tendulkar in Hyderabad and 318 with Sourav Ganguly Taunton which is still a record. 11. Dravid has taken 4 wickets in ODIs and 1 wicket in Tests. Many think Dravid didn’t bowl in International Cricket. 12. Dravid is the only Indian who holds the record for scoring Centuries in 4 consecutive innings in Test Cricket. 13. Dravid is the first non-Australian cricketer to deliver Bradman Oration in Canberra 14. Dravid is the only cricketer to play his debut match and retire in the same match. He did it in T20 Internationals. 15. In an online survey held in 2004-05, Dravid was voted as the “Sexiest Sports Personality in India”  beating the likes of Yuvraj Singh, Sania Mirza and others 17. He is the only Test player to score a Century in all the Test Playing Nations. When asked about the reason he said it in his own style – “My jersey number is 19 not because of any superstition but because it’s the best way to remember my wife’s birthday.” 19.  Dravid was honoured with Padma Shri and Padma Bhushan from the Government of India for his services to Cricket. Following are his other awards:

We wish him a Very Happy Birthday. Do share your wishes in the comments section below.

Non-Bailable Warrant Against MS Dhoni & This Time, He Might Land Up In Jail
Watch Kohli Saying “Smashed You” To Faulkner During 3rd India Vs Australia ODI