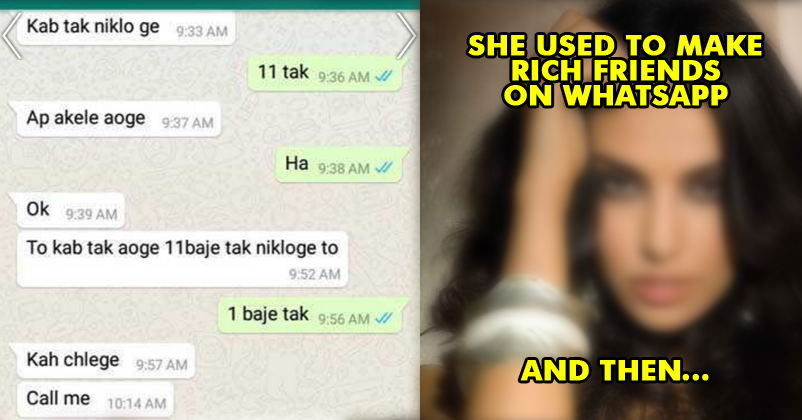 Trusting anyone on Facebook or WhatsApp has become very risky these days. Never ever add an unknown person to your list, as it can cost you a lot. If you are still taking this casually, you need to read the details of the incident below.

In Indore (MP), Cyber Crime Branch has caught hold of a gang that targets young and rich boys and robs them; the main girl in this gang is 19 year old girl Komal, who fools boys by chatting with them first and then robbing them of gold, money and other valuables. The leader of this dangerous group is China Thakur, who has a number of murder cases registered against him. It is said that he has formed this gang of girls by making false job (Catering) promises to them.

How does Komal do this?

Well, she takes a guy’s number from any random WhatsApp group and starts messaging. After befriending him, she asks him to meet. When those poor guys arrive at the decided place, she along with other robbers of the team take away all their valuables.

Here’s how Komal chats with guys; Asking a guy to meet… Currently, police officials have arrested Komal (19) along with China Singh Thakur (19) and Arjun. 3 girls and 3 guys (Sundaram, Bhura, Pintu) from that gang are missing. Reports have stated that they have robbed 3 guys from Khudail, Banganga and Lasudia respectively. Here’s the picture of this gang; A guy named Manish fell into the trap of Komal; first he spoke to her on WhatsApp, after which she asked him to meet. Manish took a friend along and went to meet her at Lavkush Steet. Komal was already waiting there with her friend; then, all 4 of them reached a park, where another gang member was waiting. After this, they reached the Kannaud jungle; the girls started talking to Manish and his friend, while the other person drove away Manish’s car. He lodged a complaint wit the Satvas police station.

Same incident got repeated with Harshdeep Jain, who lodged a complaint at Banganga Police station. The victim claimed that Komal started chatting with him and once they got close, she asked him to meet her. Yes, she called him at the same place and did the same thing that she did to Manish. Since he didn’t have a car, she robbed him of ATM cards, purse, rings and 2 mobile phones.

ASP Amarendra Singh also said that, in the first meeting, girls performed reiki on them, while in the 2nd one, they asked guys to come at a deserted place. As soon as the guy and the girl got closer, another person from the team used to come and threaten him; yes, the robber threatened the guy that he will file a complaint against him for misbehaving with a girl.

Finally, the police is successful in arresting them; rest members are also expected to be taken into custody soon.

You need to be really careful while chatting with people; sometimes, they will honey trap you and ruin your life.