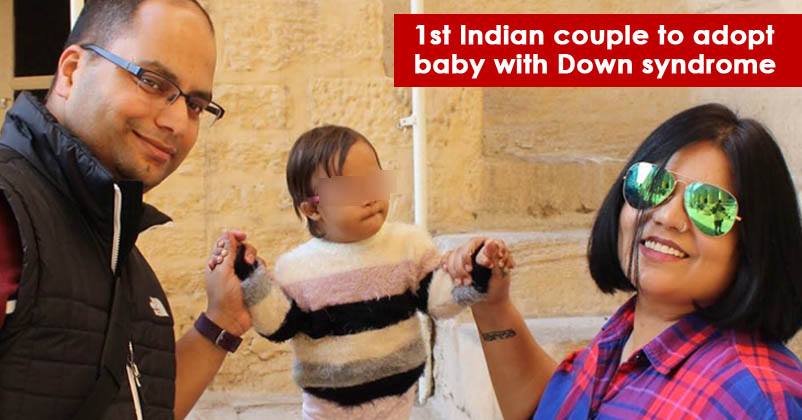 Children are the epitome of happiness. Tell me a day when you got annoyed cause you had children around you, no matter how much they annoy you, you won’t be able to be harsh on them even if they’re not your own little munchkins. The bond between a mother and her child is inseparable.

There has been a myth you can’t be a mother if you don’t give birth to your own child. Holding your new-born child is a different feeling altogether. Well, motherhood is not just about giving birth to a baby.

In our country or around the globe if we look around there are so many children craving to be loved by family.

Kavita was an HR professional and a preschool teacher whereas Himanshu is an IT professional. The couple got settled in the US for better career probabilities. During their stay in the USA, they got to know about Down Syndrome when they engaged with few children with this genetic condition.


Since then they were determined to adopt a baby girl with Down syndrome. Kavita believed that there are no reasons not to do this. Later they reached out to Central Adoption Resource Authority (CARA), the legal body in India that manages the adoption procedure.
As they were on work permit in the US hence they weren’t allowed to register on CARA. In 2017 the couple came back to India only to get themselves registered.


They adopted and brought home their little queen “Veda”. Little Veda has Down syndrome and she completes the life of Kavita and Himanshu.
Kavita believes their journey has been magnificent as Veda has accepted them completely. In fact, Kavita no longer follows the milestone chart.


Kavita and Himanshu never really cared about what society thinks and how they accept it. They didn’t have much family support for adoption but they conquered all the odds as Veda won rules everyone’s heart.


The proud and strong mother of Veda said whatever Veda will achieve it’ll be a milestone for them. Kavita is spreading awareness about Down Syndrome and shares Veda’s journey with the world.

Continue Reading
You may also like...
Related Topics:Baby, down syndrome, downs syndrome