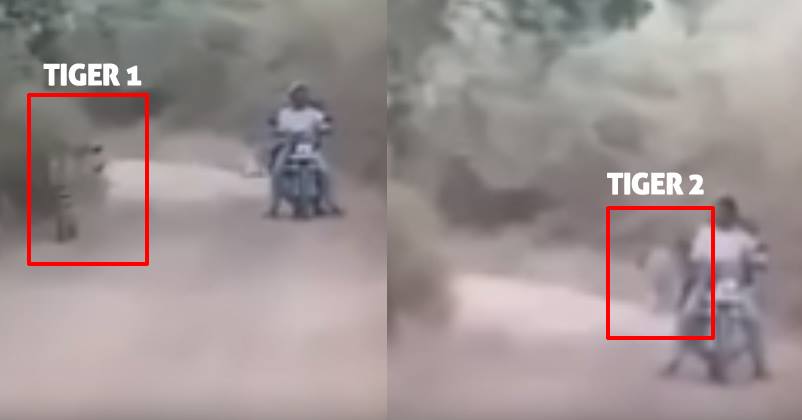 Miracles do happen and at times, we can’t help but believe them. Imagine you are in a dangerous situation where you are sure that your life is going to end and then suddenly, you get a chance to escape it. Won’t you breathe a sigh of relief or thank God for a wonderful miracle?

Well, something similar happened with both these bikers. They were caught between 2 dangerous tigers in a forest area near Maharashtra and couldn’t see any ray of hope. For a moment , they thought that END IS HERE.

A video of the same has gone viral on the internet; one of the tigers stood near the front wheeler of the bike, while the other stood near the rear wheel. However, those men were indeed lucky because they were able to escape without any attack.

A person sitting in the car parked just few meters away shot this video & circulated it online. He kept warning the men to not move or give wrong indications to the tigers. It was because of wit and smartness that they could safely escape.

At one point of time, the tigers literally started moving around the men in circle, which further frightened them. Looks as if God had showered his choicest blessings upon them that they got saved & that too without a single bruise.

Wow, lucky people! What if you were in such a situation? What would be your plan of action?

Hindu & Muslim Share A Taxi & Fight Over Nationalism. Suddenly Something Happens Which Unites Them
RJ Naved’s Message On Rape Of 8 Month Old Baby Will Give Goosebumps. People Loved It