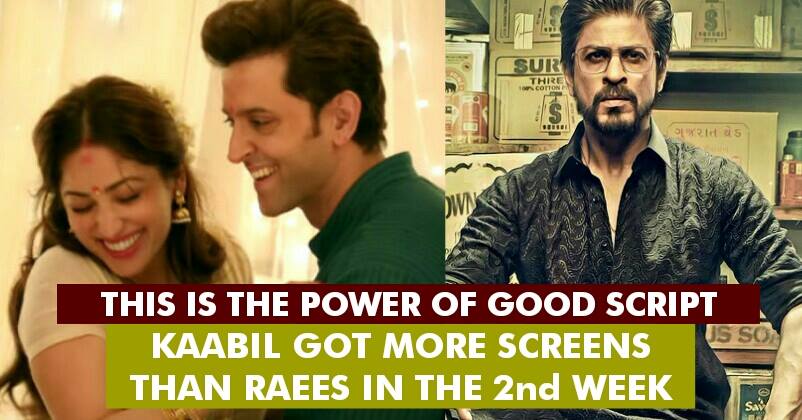 The race between Raees and Kaabil is getting intense day by day; we all saw how Kaabil inched closer to Raees every single day and how it tried hard to lead! Initially, Kaabil makers were very disappointed because the number of screens allotted to them were less as compared to Raees. Yes, initially, the ratio was 60-40!

This definitely had an impact on collections and Rakesh Roshan was too hurt by this behavior shown by the exhibitors. However, it seems that the tables have turned the other way round after 2 weeks. Yes, after the release of Jolly LLB 2, Kaabil has got more screens as compared to that of Raees. If you don’t believe us, let us show you the complete analysis of the screen count that has been allotted to both the movies on Saturday; check it out!

If we analyze the screen count of both the movies, Kaabil has got 139 screens while Raees has got 79 screens. This is quite favorable for the Hrithik Roshan starrer; the collections might increase considering the weekend and extra screens. This means a percentage of 64-36 in favor of Kaabil

The same trend is followed in Delhi as well. Kaabil has got 56 screens and on the other hand, Raees has enjoyed just 42 screens.

In Pune, the same trend has been followed; Kaabil has got 48 screens while Raees has got just 33 screens. Once again good script has proved to be favorable.

In NCR, there is a HUGE difference. Kaabil has got 141 screens while Raees has got just 89 screens. Finally good content and good script have shown their power! At the end, the popularity of Kaabil has won and this is the reason why the screen count of the movies have reversed. This is indeed a great news for Hrithik Roshan and Rakesh Roshan because their hard work has finally paid off. The ratio has now neared 70-30 percent, which means Kaabil has defeated Raees in terms of screen count…

What’s your take on this? Do share your views in our comments section below…

8 Brilliant Bollywood Movies That Didn’t Get The Recognition They Deserved
5 Greatest Rivalries In The History Of WWE, This Will Blow Your Mind!