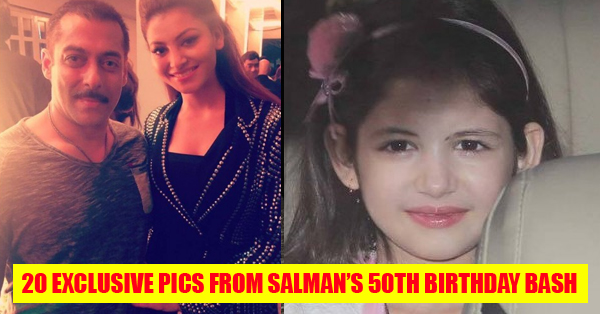 Bollywood’s Bhaijaan SALMAN KHAN has turned 50 today. No doubt this birthday is quite a special one for the Superstar as well as his friends & family and also for his millions of fans across the globe. It was well expected that Salman Khan’s 50th Birthday would be celebrated with a Grand Birthday Party and it was also expected that many of his Celebrity friends would show-up to the party to bless the star on his Golden Jubilee. Though many expected Shah Rukh Khan to be a part of Salman’s Birthday Bash, SRK wasn’t seen but undoubtedly it was a Starry Night!! The celebrities who showed-up on his Birthday Party included his cute little friend from Bajrangi Bhaijaan, Harshali Malhotra, Sania Mirza, Farah Khan, Tabu, Sooraj-Aditya Pancholi, Suneil Shetty, Sonakshi Sinha, Shatrughan Sinha, Mehak, Sooraj Barjatya, David Dhawan, Kangana Ranaut, Shreya Saran, Sonam Kapoor, Asin, Karishma Kapoor, Jacquline and many more Celebrities.
Here are some of the coolest pictures from Bhaijaan’s Birthday Party: