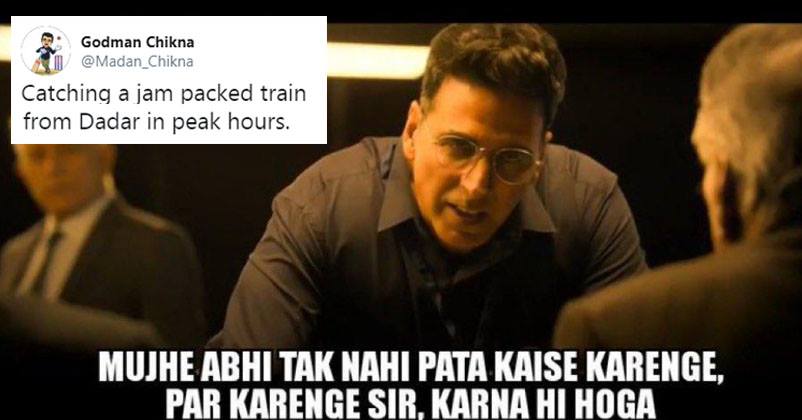 Mission Mangal’s trailer is out, and so are the memes and jokes. Akshay Kumar’s new film, co-starring Vidya Balan, Taapsee Pannu, and Sonakshi Sinha looks promising, but this is another topic of discussion. The movie’s trailer is out, and it has started yet another mission, mission memes! People are pouring in their creativity, and results are on point hilarious.

One particular dialogue by Akshay Kumar, “Mujhe abhi tak nahi pata kaise karenge. Par karenge, Sir. Karna hi padhega, Sir,”. In this dialogue, Akshay says this to his supervisor at ISRO (Indian Space Research Organisation) in Mission Mangal. And this is now the mantra for meme-makers.

This dialogue is being used in various real-life scenarios. And they are so relatable!

Me to my future husband when asked to cook anything except maggi.#MissionMangalTrailer pic.twitter.com/0fmASvH7FB

When you haven't studied the whole semester and all you've is 2 days remaining for exams to prepare ~#MissionMangalTrailer pic.twitter.com/Ld1AK31MKC

CA Student trying to complete entire
syllabus One day before the exam. pic.twitter.com/05OEe5NC3Z

#MissionMangalTrailer
My friend asking me how to complete whole syllabus in one night before exam and me be like: pic.twitter.com/7n3dRgR9ja

#MissionMangalTrailer
Karan Johar to Celebrities before launching their kids : pic.twitter.com/g5UUCi04uW

Boss: Clients asked us to add one more feature and few content changes.

“Free Stay And Food”, Rajasthan Police’s Witty Tweet On Drug Bust Is Hilarious
7 Stars And Instances That Stole The Show This World Cup