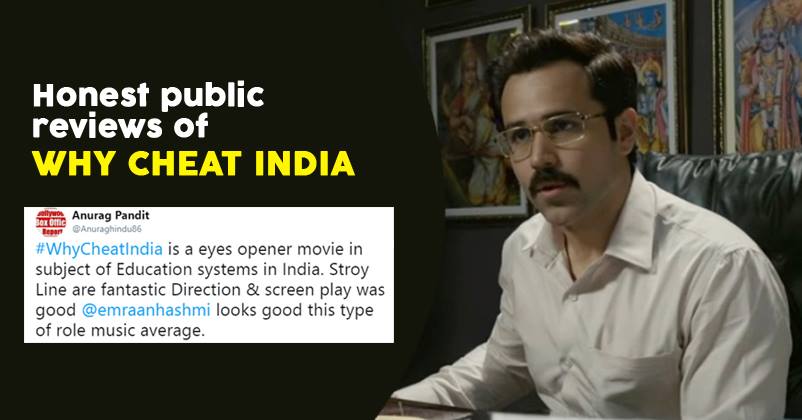 Why Cheat India released today, and people are loving the film. A lot of people are saying that the film is a bit slow, but Emraan Hashmi was brilliant in the film. 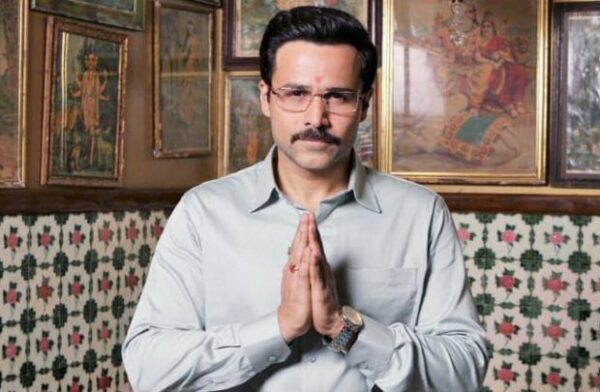 In fact, most importantly it is the theme of the film which makes it relevant and important. At least someone is finally speaking about the corrupt education system in the country.

Check out these 20 tweets before you book tickets to the film:

Saw #WhyCheatIndia. It questions the virtues of education & its system, what governs our motivation & determines our action. A brave, unapologetic entertainment or as the great Rocky Balboa said “It ain’t bout how hard u hit. Its bout how hard u can get hit & keep moving forward” pic.twitter.com/MieJo5S6qz

Just saw #WhyCheatIndia –#EmraanHashmi is back with his 'Mast Andaaz' & highly charms you throughout the film..

The subject is majorly relatable & has been presented in engaging manner..

'A intriguing tour to the unseen world of Indian education..' –
RJ #DivyaSolgama (3.5/5) pic.twitter.com/w6IbWIHle2

#WhyCheatIndia review : ⭐️⭐️⭐️⭐️1/2 ……
A terrific realistic movie on subject of Education systems of India…. A gripping story till the end… Honestly you get to see @emraanhashmi 's career best performance on this.. Totally blown away…

#WhyCheatIndia Review –
Amazing storyline, fabulous screenplay with extremely good direction.
Music and background score were also fantastic.@emraanhashmi did outstanding performance.
Overall it's a complete entertainer with a gr8 message.
1st half is ok bt 2nd half is powerful.

ok #EmraanHashmi u were only good thing about #WhyCheatIndia .. sadly the film never picks up .. its like ur car was stuck in 2nd gear throughout .. the film is more on the lines of a docudrama sadly .. #bigbigdissapointment #WhyCheatIndiaReview

The movie takes on Indian Education System! Watch this flick to know how education has become a money making business in India@emraanhashmi is absolutely brilliant! This is undoubtedly his career best performance! A must watch#EmraanHashmi

Emraan you’re so Real & Evil in #WhyCheatIndia. Absolutely loved your performance!!! The new boy Sattu is a terrific find. The subject is so relevant and exposes the harsh reality of our Indian exam & education system. Parents & Students must watch the film!!! @emraanhashmi

A must watch for ALL @emraanhashmi fans. He is simply effortless 👏🏻💕🌟 who challenges not to change names but the system itself !!! #WhyCheatIndia stands true to ground realities, qs. our education system, is unapologetic…@tanuj_garg @atulkasbekar @TSeries @EllipsisEntt

#WhyCheatIndia is a sattire on our educational system that is archaic and corrupt, that needs a change ! @emraanhashmi is an abundance of talent , that is seen here in a totally new Avatar! Congratulations @tanuj_garg @atulkasbekar for another feather in your cap !

Brilliant watch on an extremely real and an important issue in our education system. Congratulations @atulkasbekar @emraanhashmi #WhyCheatIndia

#WhyCheatIndia drives home an important and relevant message home without it sounding preachy. Major props to the team for this! @emraanhashmi @atulkasbekar @tanuj_garg @shreya_dhan13 🙌🏼🙌🏼🙌🏼 shine on friends.

Emraan Hashmi is a terrific actor. He can say so much with his winks and the laid back body language. #WhyCheatIndia

Please go watch #WhyCheatIndia for @emraanhashmi for the sheer talent and a face we need to see more on big screen !! This will also help him make more such high concept entertaining films ⭐👍👌💐🙏🎶🎶

#WhyCheatIndia kind of thought provoking movies should be promoted to be reachable to every student & his/her parent today. Real happiness is when such movies can create an impact. @emraanhashmi wishing you good luck. Lot's of love. https://t.co/EoIhbEinWg

#WhyCheatIndia is such a beautiful film. Refreshing story impactful screenplay and @emraanhashmi delivered his career best performance on this. It's absolutely a must watch film. Go & watch

Just saw #WhyCheatIndia –@emraanhashmi is back with his 'Mast Andaaz' & highly charms you throughout the film..

The subject is majorly relatable & has been presented in engaging manner..

'A intriguing tour to the unseen world of Indian education..' (4/5) star

Are you planning to watch the film?

Sara’s Throwback Dance Video On Saat Samundar Paar Is Going Viral. Her Moves Will Make You Crazy
Poonam Pandey’s S*X Video Shared From Her Instagram & Deleted Later. This Is How Twitter Reacted