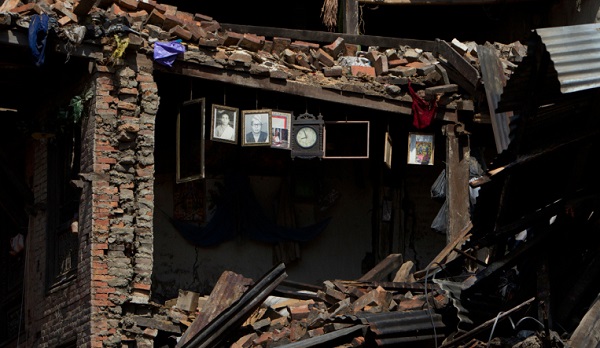 On April 25th Nepal has faced a massive Earthquake of 7.9 magnitude on RItcher Scale making it the Worst Earthquake the Country has faced over Eight Decades. The After Effects of this Massive Earthquake were felt on Northern and Eastern States of India also. Thousands of People were Injured and many other lost their Valuable Lifes in this Nature’s Outburst. Meanwhile many People who were Saved from the Earthquake are living with a “HOPE” of thier Life.

Here we bring you 21 Heart Touching Images from the Recent Tragic Incident.

One of the Injured man is Very Happy to Reunite with his Baby.

One of the Paramilitary Police Officer Comforts a Old woman who survived from the Earthquake. One of the Temple which is Devasted totally is seen with a Woman Praying inside it. Two kids play infront of thier house which is Reduced into bricks. Son consoles his mother who is Injured in the Earthquake.

An Army Soldier carries an Old Woman to a safe place. This man helps an Old Man to his Wheel Chair from the Stretcher. This Picture shows Animals are the Best Friends of Human Beings.

This man takes care of his Best Friend in his Arms.

A Flower stands tall amidst of the Tremors. A Tourist is provided Food by the Rescue Team.

A young Girl searches and collects her belongings from her House which is Damaged due to Earthquake. A Family takes Shelter under a Rickshaw. Soldiers Take out the Bodies under the Damaged Buildings. A son Cries over the Body of his Father at a Cremation ground. A man sits along his Damaged House.

People Sleep in a Conjusted manner as they wait outside the Departure Terminal of the Kathmandu Airport. Identification Numbers are placed along side the Dead Bodies outside a Hospital in Kathmandu. An Injured Boy looks out of the Hospital as other Injured Bodies are Brought in. A man Cries as he walk past a Street with a Statue of Damaged Lord Buddha.

People Run for thier Life after the Tremors and After Effects. An Old Woman picks up the Bricks which were once Part of her Beautiful House.

Mother Shaved The Head Of Teenaged Girl To Save Her From Being Raped
Do You Stay In The Most Earthquake Prone City In India? Find Out Here