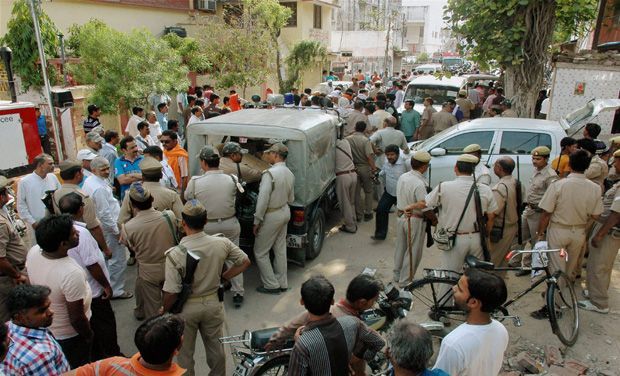 After a man was lynched and hanged in Dimpaur, Nagaland for allegedly raping a girl, A 22 year youth in Agra was beaten to death by a mob for his alleged indecent behavior with a girl.

Jeetu, a Dalit who works at a shoes factory allegedly exposed himself “indecently” when a Dalit girl from his neighborhood was passing by. After this incident, the girl complained about the incident to her family members and to police saying that, Jeetu was allegedly drunk when he misbehaved with the girl.

Both Jeetu’s family and the girl’s families are from Dalit community.

After the complain by the girl, an angry police officer with 2 of the brother of  the girl beat Jeetu to death.
An FIR has been registered against the police officer and two brothers of the girl, who own another shoe factory and are currently absconding.

The girl’s family resides in the Tamoli Para area of Shahganj in Agara.

After the death of Jeetu, Jeetu’s family members tried to block the traffic by placing his body on the road and demanded action against the culprits.

Have a look at this video, where Jeetu is being beaten by the two brothers and the police officers —

Man Caught Out With 5 Wives, 7 Fiancees And 5 Girlfriends
Wife Kills Husband (A Police Officer) Over Extra-Marital Affair in Vadodara With A Cricket Bat