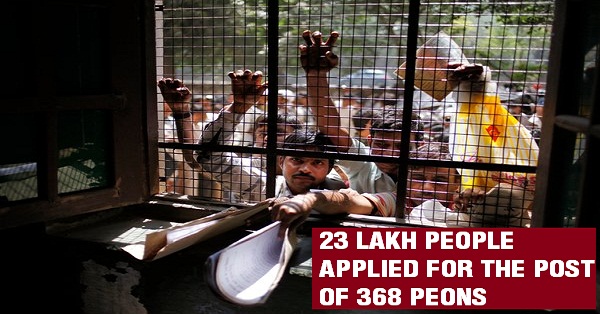 Uttar Pradesh government has opened the post of peons after a span of 10 years in its Secretariat. A total of 23 lakh applications came for the posts of 368 peons in the State Secretariat. Recruitment process is said to be done by Direct interview and will take probably 4 years to interview all the 23 LAKH candidates.

Applicants including B.Tech graduates as well as PhD degree holders say that there is height of joblessness in Uttar Pradesh. In that case, they are willing to work as a peon as well. The conditions which the state government has set is to be educated till class 5th and should know how to ride a bicycle.

How Many People Applied?

The state Secretariat Prabhat Mittal said, “Online arrangements were made for filling up the forms. But the officials were shocked to see the staggering 23 lakh applications for the post of 368 peons. He further added that on perusal, only 53,000 applications were class 5th pass.

What candidates had to say

A PhD holder candidate Alok Chaurasia said, “Instead of being jobless, there is no harm in working as a peon.” Another candidate Rekha Verma added that its better to serve water to officers and take care of files than to be dependent on your family or well-wishers for life.

Whats your take on the matter, let us know in the comments section.
Source

Continue Reading
You may also like...
Related Topics:23 LAKH People Applied For The Post Of 368 Peon's In Uttar Pradesh Secretariat, B.Tech, Including B.Tech and Ph.d Holders.