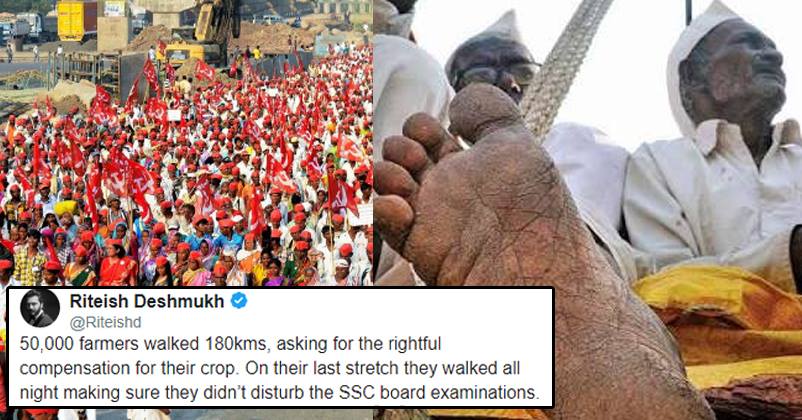 Public both online and offline is abuzz these days with the huge Farmers March happening in Maharashtra. Reportedly the farmers who have a count of around 34000 have walked together around 180kms in last 5 days reaching Mumbai.

The protest is wide but very peaceful and that’s why it’s getting all the public empathy. The farmers reached Mumbai in the midnight hours so that the public going to work and students for exams don’t get disturbed. 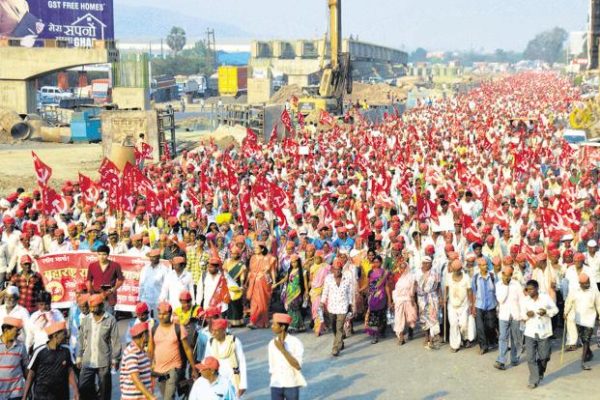 With this protest, farmers demand an unconditional waiver of loans as well as electricity bills from the government.

They also want the implementation of the Swaminathan Commission recommendations.

These demands have come following the unpredictable weather and poor rainfall which has resulted in the destroying of crops.

Meanwhile, Maharashtra CM Devendra Fadnavis held a high-level meeting yesterday to review the situation. Speaking after the meeting, he said-

“We are positive on the demands of the farmers. We have set up a six-member cabinet committee to discuss their demands.”

This farmers march is getting great support on the social media where a lot of celebs and personalities are tweeting in its favour. Have a look at some tweets-

As long as the farmers and soldiers are willing to die for us, RESPECT 🙏

The moment they protest against any injustice, POLITICAL AGENDA 😡

50,000 farmers walked 180kms, asking for the rightful compensation for their crop. On their last stretch they walked all night making sure they didn’t disturb the SSC board examinations. #Compassion #respect #Salute #JaiKisan – 🙏🏽🙏🏽 pic.twitter.com/epa0a90A6u

With blisters in the foot.. hunger in their eyes our farmers have walked seeking #fairplay #dignity …this is the Truth because of your Lies and failed promises .. will you give them justice as they knock at your door… before they rise to knock you out #justasking pic.twitter.com/6lry7X0wz1

Reposting the video of the farmer’s agitation night walk across the city.
Only the audio attached earlier I believe pic.twitter.com/bZeeJjdmCM

Calling it. So in a day or so this Kisaan March will be labeled as something else entirely, accused of having an opposition agenda, that message will 'organically' be shared through thousands of IT cells handles, and the tax money you and I spend….paid for that process. Enjoy.

I feel very emotional listening to the plight of the farmers and their stories. Walking barefoot and with bare necessities and still being as patient, calm and disciplined. I really hope we find a way to help end the prolonged ordeal of the backbone of this country – Jai Kisan!

The Indian farmer is an amazing person. He is fighting a losing battle against nature, life and the State—for years now. He deserves our respect and support. Not political cliches. https://t.co/i5mWUz5y4z

If u had food today…thank a farmer!

Some of the jokers in our Parliament and outside need to learn lessons from the farmers in Maharashtra: even protests can be decent and done with care for others. Not like louts…

Mondays are a time to share quotes about Motivaton to get to work.Over 35K farmers have walked for days to get to Mumbai.We Mumbaikars are fed by them..Seeing the elderly amongst them with calloused feet,I cannot preach about motivation.Their determination is enough of an example pic.twitter.com/DsEHwRawAw

Continue Reading
You may also like...
Related Topics:Farmers March, maharashtra

6 Youths Gang-Raped 40-Yr Woman & Posted Video On Social Media. RIP Humanity
This Is The Reason Behind Shami-Hasin Controversy? Here’s What A Source Close To Family Revealed