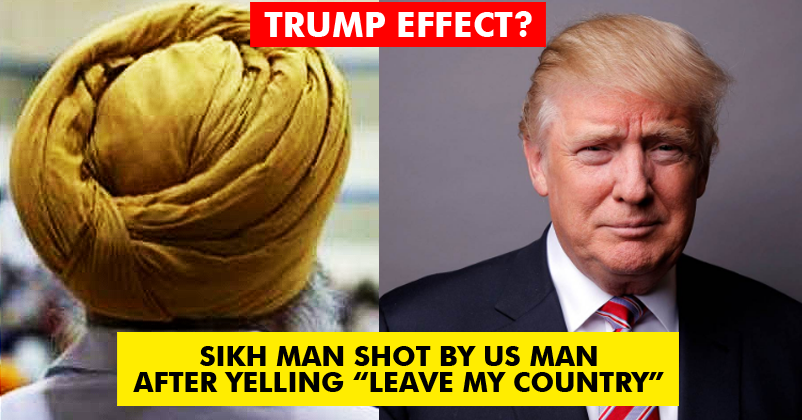 With Trump’s election as the President, the number of hate crimes against Indians has increased to a great extent. A lot of discrimination is being made against Asians and non-whites.

In a shocking incident, a 39 year old Sikh Man, Deep Rai, was shot by gun by an unknown person outside his home, after which he shouted “Go back to your country.” Well, Deep who resides in Washington’s Kent city, was checking his car outside his residence at around 8 pm and suddenly, a stranger came there and approached him. There was a heated argument between the duo; things became worse when the Sikh man was shot in his arm and was asked to return to his country. He is safe and even though the injuries are non-life threatening, this is a matter of great concern. Even Sushma Swaraj tweeted about this incident;

I am sorry to know about the attack on Deep Rai a US national of Indian origin. I have spoken to Sardar Harpal Singh father of the victim./1

He told me that his son had a bullet injury on his arm. He is out of danger and is recovering in a private hospital. /2

As per the victim, the shooter was a 6 ft tall white and had a stocky build; the lower half of his face was covered by a mask.

Ken Thomas, the Kent Police Chief stated that this is being treated as a very serious incident. Investigation is going on and FBI, along with other law enforcement agencies, have been asked to interfere. As of now, Deep Rai and his family are in a state of shock.

“With recent unrest and concern throughout the nation this can get people emotionally involved, especially when (the crime) is directed at a person for how they live, how they look.”

Leader of Sikh Community in Seattle area, Jasmit Singh, stated that violent crimes targeting Sikhs have increased in last 2 months. The community has been facing violent encounters time and again. Of late, many such troubling cases have come to light and this is the 3rd gun shot in last 10 days; recently, we reported about Indian engineer Srinivas Kuchibhotla (32) and his friend Alok Madasani, being shot dead by a US Navy Veteran, Adam Purinton. They too got the same message i.e. “Go back to your country.”

Not only this, even Harnish Patel, a store owner in South Carolina (Lancaster) was shot dead earlier this week due to the same reason. Luckily, Deep Rai is safe.

No doubt, the local officials gave a prompt response, but awareness among national leaders is also important at this point of time.
Hope things get better soon!

WTF! Man Circulated Adult Clip Of The Girl On Web After She Rejected His Marriage Proposal
Modi Proved To Be A God For This 8 Day Old Baby & Her Parents! Here’s How He Saved Her From Dying!