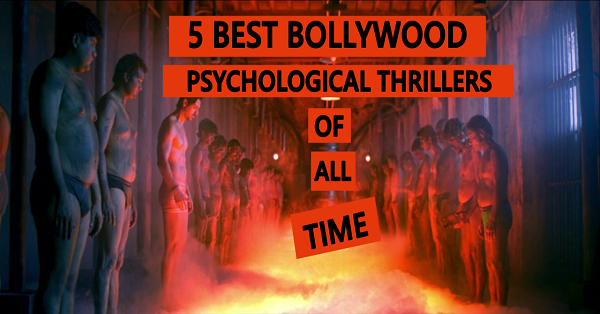 Bollywood is mostly known for its typical masala, romantic movies or for some cheap Hollywood rip off action movies. But there are many movies that distinguishes the Indian cinema from the world, defines the class of the Bollywood. Bollywood has also made some very good psychological thrillers. Some of them are very underrated and not-so-popular as the other commercial movies. Psychological thriller, as the name states, the movies of this genre describes a story which emphasizes on the very psychological of its characters, their unstable emotional states. These movies unlike the regular ones have a far more complex plot and characters. These movies have a much emphasis on the mental states of its characters; perceptions, thoughts, distortions, and general struggle to grasp reality. Hence such movies deal with themes like perception, reality, identity, death, human psyche. In psychological thrillers, a character would battle its own mind, try to determine what’s real and what’s not. Psychological thrillers can be complex, and sometimes it requires you to watch it more than one time to fully understand it. Such movies can take a second or third viewing to decipher its secrets, to interpret its complex plot.

So here are the 5 Best Bollywood Psychological Thrillers Of All Time.

Release Date: 26 October 2007
Director: Anurag Kashyap
Synopsis: A The story is about a self-obsessed, narcissist chain smoker named K (Played by John Abraham) who agrees to overcome his addiction to save his falling marriage. He visits a rehabilitation centre named ‘Prayogshala’ where he is caught in a labyrinth game by Baba Bengali (Played by Paresh Rawal), who guarantees that he will make him quit.
Why you should watch it: Just the name ‘Anurag kashyap’ is enough to make anyone watch the film. This film has brilliant visual effects, the direction is good for the most part. John Abraham completely justifies the role he’s given. This movie has gained a cult status, the only bollywood film which can have multiple interpretations. Having the elements of surrealism, fantasy, reality, black comedy, horror, the film left the audience and the critics in a confused state.

Release Date: 20 May 2011
Director: Prawaal Raman
Synopsis: Abhimanyu, a brilliant medical student starts hallucinating, experiences the unusual after moving into a room which is believed to be haunted.  Abhimanyu now has to choose between what to believe and what not.
Why you should watch it: The story-telling is just amazing and the climax is surprising. This is such an underrated movie, the cast performance is brilliant. Dealing with the themes of spirits, hallucinations, mystery, and it comes off as an entertaining movie. You might have to watch out for the climax because you might not get it at first. Bollywood isn’t used to such movies, no wonder why the movie didn’t get that much attention. But it’s a new age thriller with applauding performances and story. Release Date: 26 February 2010
Director: Vijay Lalwani
Synopsis: Karthik is an introvert who lacks confidence and feels trapped in his job. He secretly loves his co-worker Shonali, she is completely unaware of Karthik’s feelings. After being fired, Karthik becomes severely depressed and decides to end his life. Suddenly the phone rings, on the other side is a stranger who tells Karthik that he has the ability to change his life.
Why you should watch it: To prepare for his role of a loner introvert Karthik, Farhan isolated himself from everyone else. You must watch this movie to witness the class act done by Farhan Aktar. A strong script with Farhan’s versatility, sweet simple performance by Deepika, and the music of Shankar-Ehsaan-Loy makes it a must watch. Release Date: 26 February 1999
Director: Ram Gopal Verma
Synopsis: A young woman is left all alone in the house. Her family is out-of-town. The news channel reports that a serial killer is on the loose. The woman is terrified and then suddenly, the doorbell rings. Who?
Why you should watch it: This film is only 90 minutes long, three characters, shot entirely in one house. This movie was made by RGV at the time when he was good at making movies. Kaun is one of his better works. If you’re looking for a good suspense thriller then this one’s for you. With its peculiar characters, unpredictable story, and brilliant performance by the cast, this movie is one of the best cult movies to ever come out of Bollywood. Release Date: 24 May 2013
Director: Anurag Kashyap
Synopsis: When a 10-year-old daughter of a struggling actor disappears, the investigation for the girl starts a terrible tale of corruption, indifference. The characters are put in a web of deception, betrayal, self-interest which reveal their unsavory sides.
Why you should watch it: This is one of the best films ever made by Anurag Kashyap. This is a dark, dank, taut, twisting, intense and disturbing tale of the despairing state of the human motives. With a brilliant script and amazing performances, ugly is truly beautiful. This is a type of movie that is going to keep you on the edge of your seat until the end, however the ending is on a down note. Obviously many of you won’t agree with this list. And I simply don’t care 🙂

13 Epic Dialogues From MASTIZAADE Which Will Make You Go ROFL!!
The Mascot Teases The Guard, What Happens Next Is Just Awesome