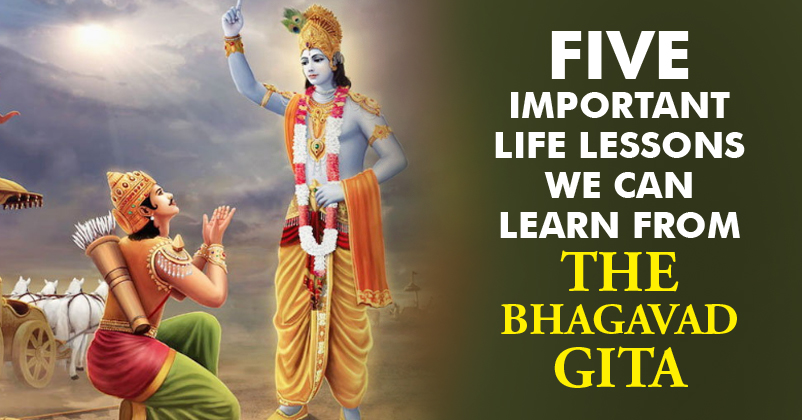 Bhagavad Gita means “Song Of The Lord”, composed as a poem, it is a narrative framework of a dialogue between Pandava prince Arjuna and his guide and charioteer Krishna.

Many great Indians like Mahatma Gandhi, Swami Vivekananda, Jawaharlal Nehru considered Gita to be the ultimate truth of life. Gandhi credited Bhagavad Gita to be the inspiration behind his selflessness. He once told “When doubts haunt me, when disappointments stare me in the face, and I see not one ray of hope on the horizon, I turn to Bhagavad-Gita and find a verse to comfort me”. Bhagavad Gita is a way of life, it shows the right path to the lost, answer to the confused, comfort to the doubted, and a supreme wisdom to all. It is a true scripture of the human race, the spiritual foundation of human existence, the only true philosophical song existing in a form understandable to the humans. The purpose of Bhagavad Gita is to deliver us humans from the darkness of material existence, to make us realize the truth of all life. To illuminate the humanity with the true realization of the divinity and to bring us closer to the true god.

1. Do not fear. Perhaps one of the biggest fears of the humans is death. Through out our lives, many of us live in fear, fearing that one day our lives would be over. We fear what we don’t know. In the Bhagavad Gita, Lord Krishna tells his devotee Arjuna not to fear death at all. Just as boyhood, youth & old age are attributed to the soul, the embodied soul passes through these cycles. Similarly the embodied soul passes into another body at death. Death is a transition, a change. The wise men never get deluded with such change. Death is a necessary part of our lives, all the worldly materialistic objects are temporary, even our bodies.

2. Whatever happened was good, whatever is happening is good and what all will happen in the future will be good. The problem with many of us are that we keep dwelling in the past for so long that we forget that we have a present now, and a coming future to look forward to. We worry about something that we can’t change, then what’s the point of worrying? We should always have faith in the supreme being, he has it all figured out already. So don’t indulge yourselves in the baseless worries of the past and the future. Live the present.

3. We all are bound to a cycle of life and death. While we are alive, we live in a materialistic world. We can’t restrain ourselves from doing nothing. Action is an important part of our lives, something that gives meaning to our existence. Whether we like it or not, we’re always doing something, we are participating in this grand cycle of events, playing our tiny part. We can’t run away from our duties, in this way we can never move forward. Selfless actions are a spiritual meditation, If we want peace, and to achieve satisfaction we have to complete our duties with utmost dedication, and without worrying about the outcome. That’s the way to move forward, to the next level. Whereas inaction is the greatest evil, and action is the antidote to the despair. 4. We must have the stillness of mind. Although we are the creatures of emotions, we can’t just take it away from us. The Bhagavad Gita tells us to treat the happiness and sadness equally. Nothing is permanent, nothing will last forever so it’s better not to get attached to such temporary happenings. Even Buddha said that desire is the root of all evil. We must not be moved by our desires. We cannot realize our own true self without looking deep down within ourselves, which is not possible unless we stabilize our mind. When we have the stillness, we can experience peace, we can experience the tranquility.

5. Never doubt yourself, don’t be afraid to fail, but be afraid not to try. The Bhagavad Gita says that a doubtful person cannot be at peace in this world or the next, he cannot find happiness in his path if he doubts. Always have the faith in your abilities, have the faith in the knowledge of the oneness. We all are a part of the supreme being, he lives in us. It’s the supreme being that acts through every living being, we humans are a mere instrument in his hands. He has a plan figured out for all of us, we must learn to trust his plans rather than doubting them. The Bhagavad Gita also says that it’s far better to live your own path imperfectly than to live somebody else’s perfectly. Follow yourself, be whoever you want to be, do whatever you want to. Always be true to your idea of who you should be. Don’t try to be what someone else is. When you pretend to be someone else that you’re not, you’ll always come short.