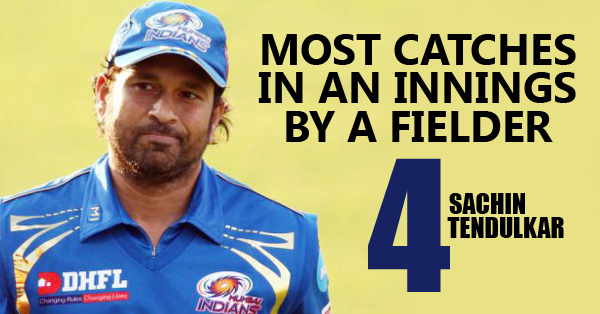 Indian Premier League popularly known as IPL was started in 2008 by Lalit Modi, ex-member of BCCI. IPL is played every year in the month of April-May. It ranks #5 when it comes to average attendance across all sporting events. Currently, the 9th edition of the league is underway. IPL is known for many records since it’s inception in 2008.

So, here presenting you 5 records which were set in the first edition of IPL but didn’t break till date.

1. Most extras in an innings – 28 by Deccan Chargers

It took place in the match between Deccan Chargers and Kolkata Knight Riders on April 20, 2008. In the first innings, KKR bowled Deccan Chargers out for a modest total of 110 runs. However, the Chargers couldn’t defend the below par score as their bowlers gave away 28 free runs (extras) which consist of 15 wides, 8 leg byes, 4 byes and a no-ball. In 2011, Royal Challengers were on the verge of breaking this record as they conceded 27 extras against Kings XI Punjab. This took place in the very first match of the Indian Premier League between KKR and RCB in Chinnaswamy Stadium at Bangalore. This match is well-known for the blistering knock of 158* runs by Brendon McCullum. KKR batted first and set a huge target of 223 runs for RCB and then bowled them out for just 82 runs thereby registering a 140 run record victory. The top scorer for RCB in this match was by extras (19). This took place in the match between Mumbai Indians and Kolkata Knight Riders on 16th May 2008, at Wankhade Stadium, Mumbai. Mumbai bowlers collectively fired against the KKR and bundled them up for record lowest IPL total (at that time) of 67 runs in 15.2 overs. Sanath Jayasuriya set the chase on fire as he completed the chase in just 33 balls (5.3 overs) with an unbeaten 48 off 17 balls. With Mumbai’s 68 runs and Kolkata 67 runs, this match holds the record for the lowest match aggregate in IPL. 4. Best bowling figures in an innings – 6/14 by Sohail Tanvir

Rajasthan team was considered the weakest team of IPL 1 despite having some world-class bowlers like Sohail Tanvir and Shane Warne. This took place in the match between Rajasthan Royals and Chennai Super Kings on 4th May 2008, in Jaipur. Sohail Tanvir picked 6 wickets for just 14 runs against CSK thereby creating a new record in IPL. Tanvir is still the only bowler to pick a 6-wicket haul in IPL. The next best bowling figure is 5/5 by Anil Kumble for RCB against Rajasthan in IPL 2. Sohail Tanvir was the highest wicket taker for the first season with 22 wickets. 5. Most catches in an innings by a fielder – 4 catches by Sachin Tendulkar

This took place in the same match where the above record of lowest match aggregate was set between Mumbai and Kolkata. Sachin Tendulkar set a record in IPL which still holds after 8 successful seasons of the tournament and it is nothing to do with his batting. Yes, Sachin took 4 catches to dismiss the KKR batsmen – Salman Butt, Shoaib Akthar, Wriddhiman Saha and Ajit Agarkar. This record was later matched by David Warner for Delhi Daredevils in 2010 and Jacques Kallis for Kolkata Knight Riders in 2011 but no one surpassed it yet. 15 Amazing Facts You Didn’t Know About Olympic Games.!!
These 10 Indian Cricketers’ Journey From Rags To Riches Inspires Us To No End