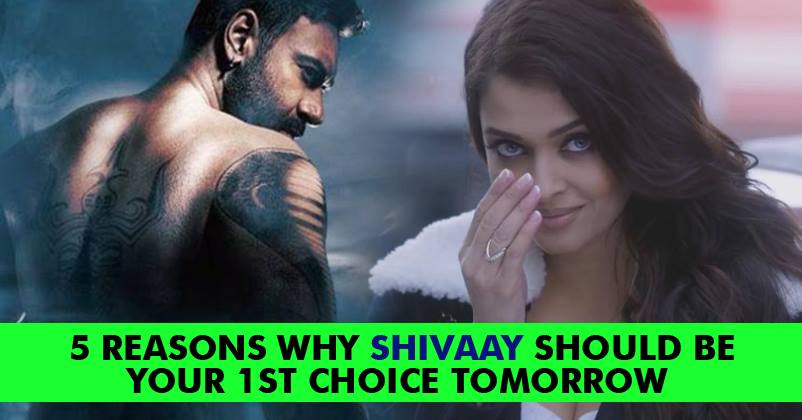 If there is someone who is a class apart in terms of his acting skills in competition with the Khans and the Kapoors, it certainly ought to be THE DEVGAN of our Bollywood Industry. He does not believe in the conventional film-making and his recent production SHIVAAY has indeed proved the stand that he holds. The Shivaay movie will be releasing tomorrow along with its competitor Ae Dil Hai Mushkil. Now here we are SUGGESTING you top 5 reasons as to why you should opt for Shivaay instead of spending your hard earned money on a conventional movie like Ae Dil Hai Mushkil.

Disclaimer – Our opinions against ‘Ae Dil Hai Mushkil’ ARE CERTAINLY NOT because of the ‘recent controversies’ erupted against the movie. The reasons and opinions expressed by the writer have not been influenced by any political party, organizations or person. It is totally the outcome of the thought process of the writer. We are in no way forcing our opinions on you. You have every right to watch, listen and do according to your needs.

1. It has successfully maintained the suspense and the thrill. Since the trailer didn’t reveal the plot of the movie, it is certainly going to keep up our excitement till the very end. Meanwhile, ‘Ae Dil Hai Mushkil’ seems like the same old Karan Johar directed movie with the same boring melodrama between the lovers. Basically, it’s the ‘beta’ version of ‘KABHI ALVIDA NA KEHNA’ having fewer lead characters.

2. Shivaay is not just like any other old romantic movie.

Shivaay is an amazing blend of relationships. It revolves around fatherhood, love, romance and enmity. It is a story about an ordinary father who does extraordinary things to keep his family safe against extraordinary villains. While Ae Dil Hai Mushkil is just all about romance and friendship which has been blindly followed ever since ‘KUCH KUCH HOTA HAI’.

3. The art of cinematography is something worth watching for.

It is the cinematography of the movie which is grabbing more eyeballs from around the world. The first of its own. None of the movies in our Bollywood industry has ever experienced such an art. The camera positions and the angles for getting various awestruck shots are just sublime. While it is the movie Ae Dil Hai Mushkil which can’t help itself as the movie plot is totally different which doesn’t require merit like these, making it less demanding for the audience to watch it.

4. The action scenes in Shivaay will be a total ‘paisa wasoool’ for the audience. The action scenes in Shivaay are certainly the most well scripted, directed and perfectly executed ones in the entire history of Bollywood. The amount of energy, time, money and talent used for channelizing these shots till the rim of perfection is worth applauding. While Ae Dil Hai Mushkil doesn’t even seems somewhere near to it. That is the least you can expect from a LOVE STORY and DHARMA PRODUCTIONS.

5. Ajay Devgan’s raw acting is the ultimate thing to watch out for. It is the DEVGAN factor. His raw acting with epic dialogue delivery is certainly to watch out for. The intensity though which he executes and does justice with his character is definitely worth appreciating. Ae Dil Hai Mushkil does showcase some of the finest talents of our Bollywood, but it certainly falls apart in front of Ajay Devgan and the perfectly compatible movie plot.

So these were some of the reasons as to why you should probably switch your mood to watch SHIVAAY instead of Ae Dil Hai Mushkil, but ultimately it’s your choice. Shivaay is a family movie which will churn out your love for your family. Go out and watch this movie, and we assure that you won’t regret about it.

Armaan Kohli & Kushal Tandon Want To Enter Bigg Boss 10 House To Teach Commoners A Lesson
Good News For All SRK Fans! His New Movie Is On Its Way & You’ll Jump With Joy Hearing The Name