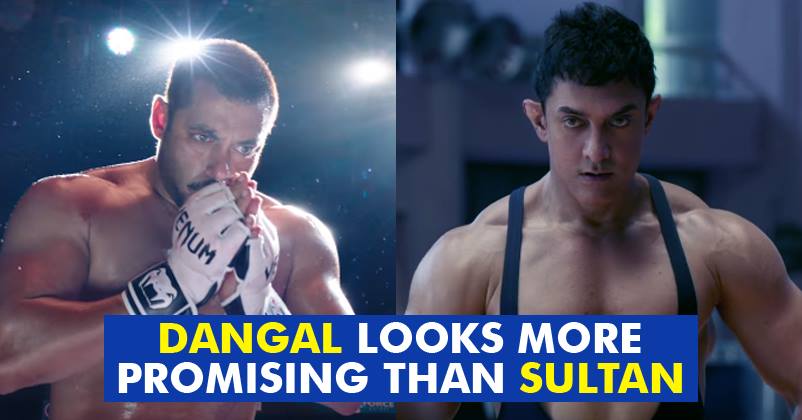 The much awaited Aamir Khan’s DANGAL movie trailer has just been released and it has already started to grab everyone’s attention. A lot of appreciation have been showered for the genre of this movie, which is apparently the reason as to why people are liking it. The ups and downs in an athlete’s life is something which is never talked about. Salman Khan’s recent blockbuster movie – SULTAN tried to depict that exact same scenario, however, these two movies are still too different from each other.

After the trailer broke out on the Internet, many people started relating Aamir’s DANGAL to Salman’s SULTAN, which is although based on the same genre i.e WRESTING, but is still miles apart from each other. So here are some few key points as to why we think that Aamir Khan’s DANGAL is better than Salman Khan’s SULTAN.

DISCLAIMER – This article is not a paid article. And we do believe in the fact that every actor and filmmaker has his own way to portray a particular story which may or may not reflect his thinking. We are in no way writing this article with an intent to degrade the amazing acting skills and efforts put in by various members of SULTAN movie cast. No, not in the way how RAHUL GANDHI showed it at Arnab Goswami’s show. In Salman Khan’s SULTAN movie, Anushka Sharma’s character ‘AARFA’ had to leave her profession due to her pregnancy. And after that, no one gave a thought about bringing her back to the arena where she belonged. But, it is the girls in DANGAL who are asking for the real ‘dangal’. The wings of their dreams are not being tied by any stumble of their life that is trying to shift their focus from their aim. Well, I don’t want to act like a stereotypical ‘arsehole’ about all this, but women wrestlers don’t really wear clips while they are training for something like FREAKING WRESTLING. While wrestling, any foreign object is never allowed to be attached with any parts of your body. And that is why, the DANGAL GIRLS i.e Fatima Sana Shaikh, Sanya Malhotra had short hair so that they don’t have to use any clips to keep their hair at place.

3. Aamir Khan successfully maintained the ‘HARYANVI’ accent through out his DANGAL movie trailer, while Salman Khan kind of lost it in his movie. It is always quick and easy to pick up the Haryanvi accent, but it is tougher and harder to maintain it at the same pace. And well, there is a reason why Aamir Khan is known to be a ‘perfectionist’. His HARYANVI ACCENT was spot on, while Salman Khan’s accent was somewhere slipping off.

4. DANGAL movie is not just about AAMIR KHAN, unlike SULTAN, it revolves around many people. The poster as well as the trailer of both the movies tells us everything. While it was the ‘BHAI’ factor which made the movie superhit, it is now the overall crew and the amazing story compilation of the movie which will break the records. SULTAN movie showed everything but just SALMAN KHAN, while the DANGAL movie looks promising which will show the amazing blend of an athlete father’s journey to raise up two super talented athlete kids. When it’s an aggressive sports movie, words like ‘ROMANCE’ and ‘LOVE’ should not be allowed to find enough on screen time. Dangal movie trailer doesn’t seems like it is going to have much chemistry among any lead characters which is probably good, given the kind of audience it is about to entertain.

So here were some of the key points which we think differentiates SULTAN from DANGAL in a positive manner. What are your views about this. Share your opinion in the comment section below.

Poonam Pandey Reveals The Actor She Loves The Most! Says He Is The Sexiest Man Alive….
From Rajiv Bhatia To Akshay Kumar! Here’s The Reason Why He Changed His NAME!