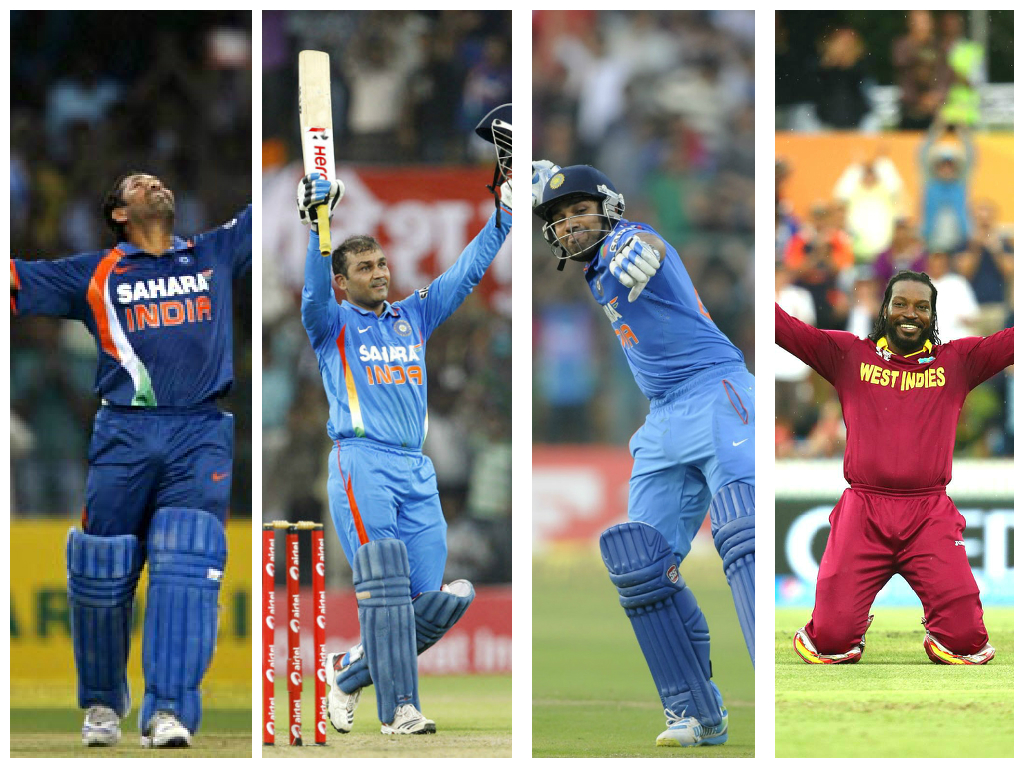 It has been 5 Years since the Birth of First ODI Double Hundred. 5 Double Hundreds were Scored till 24.02.2015, the List Goes as Follows: Gayle’s historic knock once again raises an important question – Whose innings was the best?

All five were special in their own way. Yet,the comparisons are inevitable. While it maybe difficult to answer the question, Sachin Tendulkar’s monumental effort exactly on 24th Febuary takes the cake for a lot of reasons. Here are five Reasons of them! Whether it is your First kiss, First job, First bike or First love, the satisfaction a ‘First’ offers is truly unmatched. The Master did the unthinkable. Sachin Tendulkar made us believe that a double hundred in ODIs can be achieved. In Ravi Shastri’s words, ”First man on the planet to reach 200, and it’s the Superman from India!“. The fact that he did it in India, in front of his fans makes it even more special and memorable. Sachin’s flawless 200 not-out is fifth in the list of double tons, but for his fans, this historic feat remains on top.

2)Best Bowling Attack in the World: With the Lights of Dale Steyn , Morne Morkel  and others the Proteas are a much better bowling unit than Zimbabwe, Sri Lanka, West Indies, and even Australia on any given day. To bat against a side that features Dale Steyn as their spearhead requires immense grit and concentration. Sachin Tendulkar crafted his masterpiece against the likes of Steyn, Kallis, etc. The sheer skill with which Tendulkar dispatched Steyn’s menacing deliveries was magical. Gayle, Sharma and Sehwag – each them played against an attack that wasn’t as threatening as much as the South African bowlers, barring Australia who were just slightly more competitive. Even then, they weren’t as high-quality as the Protea firepower. Had the umpire’s decision been overturned, Chris Gayle would have been out first ball. And the world would’ve missed the Gaylestorm. This is not the first time that a double centurion got lucky. At least three of these five double hundreds have been beneficiaries of the Lady Luck. Rohit Sharma received reprieves in both his innings, while Virender Sehwag survived an early chance as well. But not Sachin. Throughout his stellar knock, Tendulkar was in solid command and paced his innings to perfection. Not once did he offer the Proteas any Chance whatsoever and Dominated from start to finish. Rohit Sharma’s double hundreds against Australia and Sri Lanka featured too many mistimed shots. On any other day, it would have done him more harm than good. Virender Sehwag isn’t the most fluent shot-maker and Gayle is all about one chance. None of these batsmen exhibited the consistency that Tendulkar displayed. Gayle’s first big hit came in the 11th over, after a slow start. Rohit is usually just slow. Tendulkar though, kept up with the momentum to build one heck of an innings.

5) Still the Oldest Player to Score 200 and being Not Out: Sachin Tendulkar remains the only batsman to carry his bat after scoring a double hundred in ODI history. Both Sharma and Gayle have been dismissed on the last ball of the innings. Sehwag too, departed towards the end. To open the innings, decimate the opposition and walk back to the pavilion with head held high is the perfect icing on the cake!

Also Sachin Tendulkar Remains to be the Oldest Batsman Still to Score a Double Hundred.

Sachin Tendulkar scored at the Age of 36 years 10 months 0 days.

Chris Gayle scored at the Age of 35 years 5 months 3 days.

Virender Sehwag scored at the Age of 33 years 1 months 18 days.