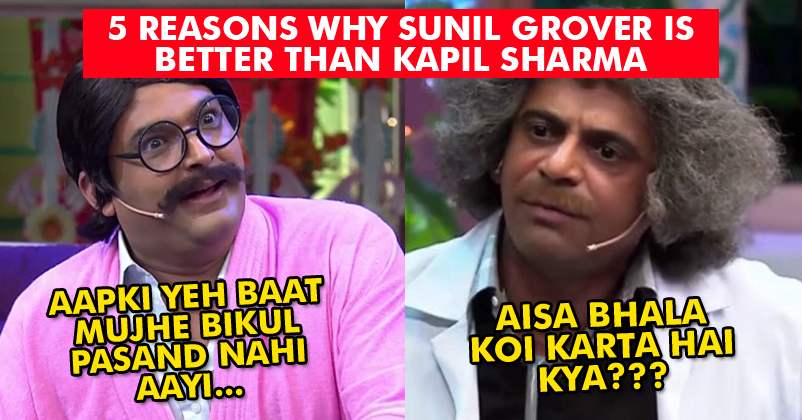 Undoubtedly ‘The Kapil Sharma show’ is one of the most popular and entertaining show on the Indian television right now. After having a rift with Colors, the channel decided to let the comic star go. So after a successful run of three years with Colors, Kapil and his team left the famous show ‘Comedy Nights With Kapil’. Colors decided to rebrand the popular show, the channel came up with ‘Comedy Nights Live’, Krushna Abhishek became the host of the show. Kapil returned to television with ‘The Kapil Sharma Show’ on Sony TV. It was expected that Kapil’s show would get a tough challenge from Color’s Comedy Nights, but The Kapil Sharma Show easily dominated the latter in the ratings. The Kapil Sharma Show is gaining the highest TRP ratings in the non-fiction category. The show format is an Indian sketch comedy and a celebrity talk show. The show revolved around Kapu Sharma (Kapil Sharma) and his neighbors in the Shantivan Non-cooperative Housing Society. Every week there’s a celebrity guest on the show. Apart from inviting just the popular actors and celebrities, the show even had international stars, musicians, cricketers, sports persons appearing as the special guests. The live audience gets the amazing opportunity to ask questions to their favorite celebrity. The interaction with the live audience brings out the laughter and is one of a kind on the Indian TV. Earlier the critics dismissed the show for its repeated humor, jokes and characters. But Kapil and his creatives embraced the negativity, they innovated themselves, came up with new characters, new guests, new humor and skits. One big reason behind the success and popularity of ‘The Kapil Sharma Show’ is Sunil Grover. He has set new standards of comedy. His character of Dr. Mashoor Gulati is the reason why most of the people tune into the show. Right from the very first episode Sunil Grover has managed to make us laugh with his hilarious characters and terrific comic timing. He is one of the big reasons why people watch The Kapil Sharma Show every weekend. So let’s take a look at 5 Reasons Why Sunil Grover Is Better Than Kapil Sharma!

1. Making someone laugh without uttering a word is only the work of a comedic genius. Kapil may be the undisputed king of comedy, but Sunil Grover is the funniest man alive on earth. If it weren’t for Sunil Grover, Kapil’s show would have never become as much popular as it is today. Sunil, with his hilarious characters has played a big role in making Kapil Sharma Show a hit. He has the talent of making you go rolling on the floor laughing just with his expressions. His one crazy move will make you burst into laughter. 2. He has the natural gift of making others laugh. Sunil’s humor is very natural and spontaneous. While stand-up artists rely on their scripts, their punchlines to bring out the cheers and claps. Sunil Grover can take any ordinary line and can make it sound funny. No one else can get away by saying dialogues, puns, and jokes like he does. He doesn’t need a script to make people laugh, you just put him there in front of the crowd, and he’ll bring out the laughter somehow. With his wacky dressing sense, unique mannerisms, funky tone and hilarious dance moves, he entertains us like no one else can. 3. The best thing about Sunil Grover is that his jokes are enjoyed by everyone. They are never aimed for adults, they have no double meaning, they are very plain and simple. And when you look at Kapil, no doubt he’s spontaneous, there is an impromptu humor. But his jokes are his sarcastic and sometimes mean, his jokes tend to make people laugh by talking bad and insulting others. Sometimes he crosses the line, he even disrespects and degrades people just to bring out the laughter. And it’s not funny when he body shames someone in the name of entertainment. Of course people would simply laugh and may not realize it.

Take a look at this joke of Kapil. He always body shames Bumper, mocks her for being fat. And now take a look at this ordinary, but extremely funny joke of Sunil Grover. 4. Sunil Grover is the synonym of versatility. One of the big reasons why ‘Comedy Nights With Kapil’ became a hit was ‘Guthi’. When Sunil left the show, there was a decline in the ratings. Even now Sunil Grover plays a variety of characters like Dr. Mashoor Gulati, Rinku Bhabhi, Police woman. Each character is different, they have different accents, voice tone, dress different, but all the characters are equally entertaining. 5. Sunil Grover is a better actor and entertainer than Kapil Sharma. He was born to entertain the people and make them laugh. Sunil once said in an interview that he hoped to be either a doctor, engineer, or pilot and this was only possible through acting. He used to mimic his teachers, relatives, Bollywood stars when he was a kid. Later he became a radio jockey and his program was a hit. Sunil’s first passion will always be entertaining people, making them laugh. He doesn’t want big movie offers, he doesn’t want the limelight, he just wants to make the people laugh. Ranveer Singh Recreates Shah Rukh’s DDLJ Magic! We Bet You’ll Love Ranveer For This!
OMG This Is What Hrithik Roshan Said About His Father On Kaabil’s Success