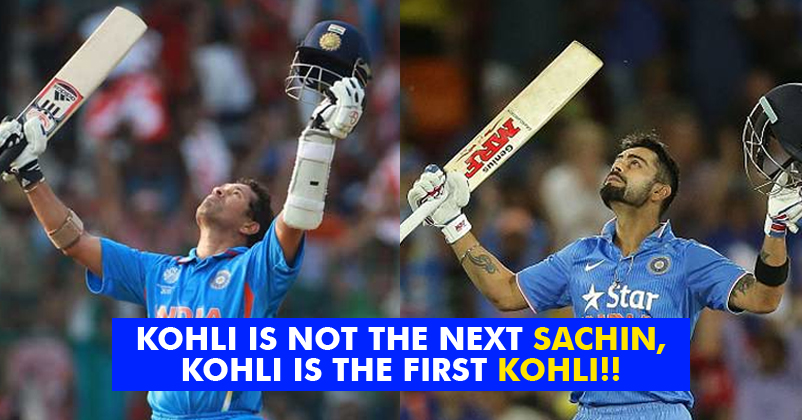 Sachin Tendulkar, a name that turned a game into a religion, a name that inspired millions. Sachin Ramesh Tendulkar, regarded as one of the greatest batsmen ever. The child prodigy who took up cricket at the age of 11, made his test debut against Pakistan in 1989. He has spent more than two decades on the field, made dozens of records. Virat Kohli, the Indian test skipper who is rated as one of the best batsmen in the world. This young batsman is slowly breaking many old records, creating news ones, cementing his legacy amongst the greatest batsmen of all time. Kohli made his international debut in an ODI against Sri Lanka at the age of 19. Before his international ODI debut, Kohli captained India Under-19s to victory at the 2008 Under-19 World Cup in Malaysia.

Sachin’s contribution to the Indian cricket is unparalleled. For any kid who’s born in the 90’s, Sachin is a synonym for cricket. So many memories and a never ending nostalgia is attached with Sachin. Tendulkar is the reason why Virat Kohli started playing cricket, it was Sachin who inspired Virat to make a career in the sport.

Sachin Tendulkar is often compared with Don Bradman because they both shared a similar technique, even Bradman had acknowledged that. The right footwork, orthodox shots, right stance, best style to play, no loose shot selection, quick judgment of the ball, and many such qualities which have placed Tendulkar as the greatest batsman of the modern era. If you look at Virat’s batting, you’ll see he’s a modern, innovative version of Sachin Tendulkar. You can’t deny the similarities between Sachin and Virat. Virat like Sachin has become the mainstay of the Indian batting line-up, the rival teams want to dismiss Virat as early as possible, as long as he’s at the crease, anything and everything is possible. The same was the case with Sachin Tendulkar, people turned off their TV sets when Sachin got out. Although Virat has a long way to go before being cited as ‘ The Greatest Indian Batsman’, but look at his stats and performances so far, one can definitely call him ‘The Best Indian Batsman’.

Have you read 15 Reasons Why Sachin Is The Greatest Batsman Of The Modern Era?

So let’s take a look at 5 Reasons Why Virat Kohli Is Better Than Sachin Tendulkar!

1. To be fair, you can’t compare the two batsmen. The pitches, bowlers, batting equipment, game rules, technology, a lot has drastically changed since 1989 when Sachin made his debut. Let’s make a Statistical comparison, let’s take a look at their records after 41 tests and 171 ODIs. Clearly Virat is better than Sachin. 2. Take at look at these stats, it has data for only those matches where the team batting second successfully chased down the target. Kohli is perhaps the best batsman in the world when it comes to chasing. 15 of his 25 hundreds have come in run-chases, only two fewer than Sachin Tendulkar who holds the record for most hundreds batting second. Kohli will surely break that record. 3. Virat Kohli is definitely a much better captain than Sachin ever was. Sachin will forever be remembered as the genius batsman, but never as the captain of Indian team. Virat’s aggression and a winning attitude is leading team India into a whole new era. Virat has proved in the IPL, and now proving in the test cricket that he has what it takes to carry the team. 4. The sport of cricket has been through many transitions. This is the era of the batsmen. 300+ runs on board is not considered an impossible score now Batsmen scoring 150+ easily, even crossing 200. T20 format’s popularity is growing day by day, Virat is not just best in the ODI format, but he is the master of the T20 format too. He holds the records for the fastest in the world to reach 1,000 runs in T20 format. He holds the record for the most runs scored by a batsman in IPL.

5. Virat is in his prime form at this time, if he continued his form and maintained the same attitude and love for the sport, then there’s no doubt that he’ll break most of the Sachin’s records. Even Sachin has said that Virat has the potential to break his records. Virat is a tremendous athlete, he’s very fit and pushes himself to the limits. When it comes to fitness, no one takes it more seriously than Virat in the Indian cricket. That’s the reason why he has been so consistent and didn’t suffer from any injuries. Tendulkar’s career spanned over 24 years, but the injuries always troubled him.