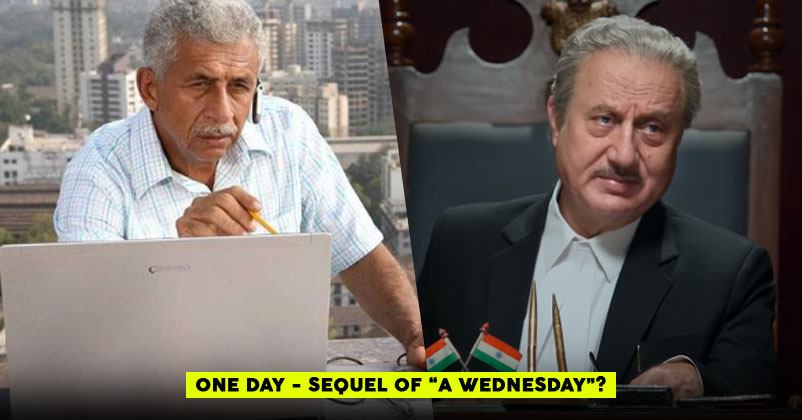 Words are going to fall short to describe how brilliantly A Wednesday was helmed by Neeraj Pandey. As it’s rightly said: It’s impossible to suppress a good film. A Wednesday stars the majestic duo Naseeruddin Shah and Anupam Kher.

Back in 2008 nobody knew Neeraj Pandey but this movie made Neeraj Pandey the man he is today and he deserves all the recognition from around the globe. This movie’s greatness lies in doing simple things so perfectly.

This Friday an action thriller filmOne Day: Justice Delivered is set to hit the theatres on 6th July. One Day is an action thriller helmed by Ashok Nanda starring Anupam Kher, Esha Gupta and Kumund Mishra. The movie focuses on the investigation and strategies followed by a crime branch special officer to solve the mystery of missing high profile persons.

5 Reasons Why One Day Looks Like A Sequel Of A Wednesday:

1. Not A Layered Film
There is nothing outrageously complicated or layered in the film, neither there is some out-of-the-box idea but the execution of it all is where the film’s real appeal is. However, A Wednesday is also a simple movie with an amazing plot and twist.

2.Unpredictable Twists
One Day has a crisp storyline and the movie has several twist and turns which is going to leave the audience in awe. Just like how Wednesday left an impact on the audience.

3. Both involve strong leads
The star cast of both the movie is very strong. Anupam Kher is a relevant face in both movies. Esha Gupta plays a vital role in the movie along with Kumud Mishra, Zarina Wahab. A Wednesday had brilliant actors like Naseeruddin Shah and Anupam Kher in the lead role.

4. Both have the story of a commoner for a change
One day raises a question that how far we can go to fight against the unfair judgement and breaking the law for the fair justice is right or not. Whereas in A Wednesday a commoner informed the police officer about a bomb scare.

5. Action thriller
Both the movies are definitely not your average action thriller. In fact, it comes loaded with a very solid ideology – there’s more to this film than just action.

Watch the trailer of One Day, if you haven’t watched it yet!

Tamil Nadu Woman Finds Her Missing Husband After 3 Years Through TikTok
Jadeja Lashes Out At Sanjay Manjrekar, Says He Has Enough Of His ‘Diarrhea’