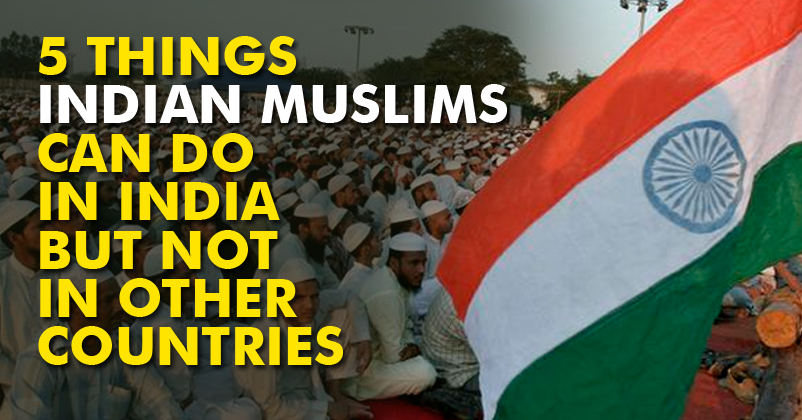 What makes India a beautiful nation? Its scenic beauty or its monumental history? No! What makes it beautiful is its unity in diversity. The people of India who stand united despite all their religious enmities are the real beauty of India. They prove why it is such a proud feeling to call yourself an Indian. Indians change their dialect after almost every mile but the sense of unity remains the same.

Religion has always been used by the hate mongering politicians to break this unity but still they were unable to break this beautiful bond of national unity. A person is a Hindu, Muslim, Christian or whatever when he takes birth but if he is taking birth in India, he is an Indian even before his birth.

India welcomes every religion, sect, caste and creed with the same sense of affinity. Being a Muslim is quite difficult owing to the present global scenario but being an Indian Muslim is as easy and peaceful as it always used to be. Restrictions are always in place for Muslims in any country but in India, they are free to do whatever they wish to. To explain this with a bit more detail, let us see these five things which Muslims can do in india but not in any other country.

1. Applying For A Passport In India, the government does not consider one’s religion for issues like passport issuance. The procedure to apply for a passport is same for every person in India irrespective of the person’s religion.

However, the same does not happen in Pakistan. Muslims having a connection with the ‘Ahmadiya’ sect are not allowed to apply for a passport normally.

2. Travel To Any Country Indian Muslims are free to travel to any country across the globe. However, if you have a Pakistani, Irani Iraqi or Afghani prefixed to your Muslim status, you won’t be allowed to visit Kuwait. Even China doesn’t allow Muslims to enter their country. China orders all its hotels to turn away people from Pakistan and other Muslim countries. In India, Muslims practice their religion freely. They observe fasting during the holy month of Ramzan and are ably supported by followers of other religions too. However, there is a ban on Ramzan fasting for Muslims in China.

4. Obtain ‘Haj Subsidy’ From Its Government If allowing Muslims to follow their religion freely wasn’t enough, the India government even helps them financially. Government of India gives financial assistance through ‘Hajj Subsidy’ to its Muslim citizens. This is a rarity in any other Non-Muslim country.

5. Participate In Other Religion’s Festivals In India, there is no restriction on Muslims to come out and celebrate festivals. They are free to hug their fellow Non-Muslim countrymen. This social harmony has kept India and its cultural diversity intact.

India has been a special country in the globe for its diverse unity, for its affinity to humanity and above all for its varied culture which is a contribution from all the different religions. Do let us know if you know any more such things that Muslims can practice exclusively in India in our comments section below.

Rotating Skyscraper Is About To Come In Dubai, Every Apartment Will Spin Individually
2 Courageous DU Girls Wanted A Night Out Permission; The Reason They Gave Is Damn Hilarious