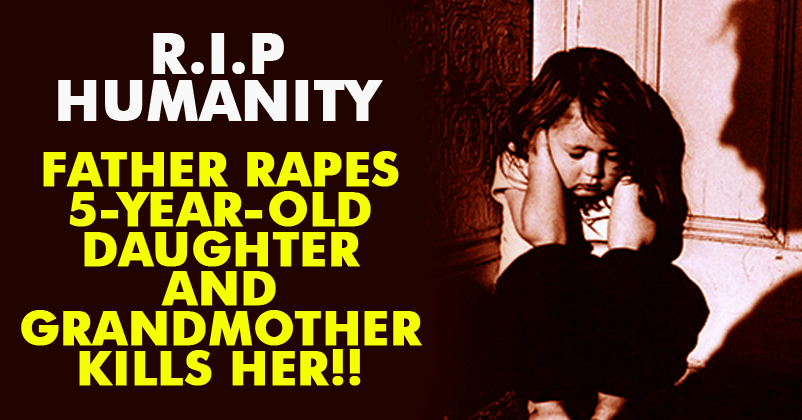 No matter how much we try and pressurise the government to take strict action against rapists, but there’s hardly anything happening.

Nirbhaya case was closed down to justice a few days back when the rapists were given a death sentence. But, a simple death sentence is enough for someone who has done something as disgusting as intruding the modesty of a girl and that too in the most shameful way possible? Sure, those rapists deserved a worse death than a simple capital punishment.

Now you will say there is something called Human rights, but do they even fall in the category of Humans? You may be able to understand the point after knowing about this new rape case that happened recently in Nashik.

A 26-year-old labourer ‘Sachin Shinde’ has been arrested by Nashik police who allegedly raped his five-year-old daughter on Saturday night after returning from a wedding in a drunken state. The labourer’s mother ‘Anusaya Shinde’ has also been arrested, who allegedly strangled and killed the girl to save her son from the police case.

Now can you even digest the fact that a 5-year-old girl was raped by her own father that too in the safety of her own house? What those politicians have to say who ask women to stay in their house during late hours and to always choose certain kind of dresses while going outside?

This girl was too young to experience something like rape, especially when she was right inside her home. As per the local police, Anusaya had dumped the girl’s dead body behind a school, ‘found’ the body during a well-planned ‘search’ with the help of a nephew and then got a fake case registered with the police hours after alleging that the child had been kidnapped, raped and killed by unknown persons.

According to the police, Sachin had picked up her daughter at a time she was sleeping with the grandmother and took her to a separate room to rape her. All this while, the girl’s mother was not at home.

Anusaya, after dumping the body, hit the police station and reported that her granddaughter was picked up from her house, raped and killed behind the ZP primary school.

The police recorded her complaint and registered cases against unidentified assailants under the Protection of Children from Sexual Offences Act. During the initial investigations, when the police team recovered the body from the spot, it led them to Shinde’s house, the officer said. Based on preliminary investigation, the police questioned the Sachin and his mother Anusaya and they confessed to the crime, he said.

A case was lodged against Shinde under IPC section 376 (rape) and relevant sections of the Protection of Children from Sexual Offences Act-2012 (POCSO), while his mother was booked on charges of murder, Vani police station in-charge, ML Pawar said.

Continue Reading
You may also like...
Related Topics:India, maharashtra

3 Cattle Traders Killed By Crowd As Villagers Mistook Them For Child-Lifters! Disgusting!
World’s Most Expensive Feature Phone Launched! Can You Guess The Price? Read To Find Out!