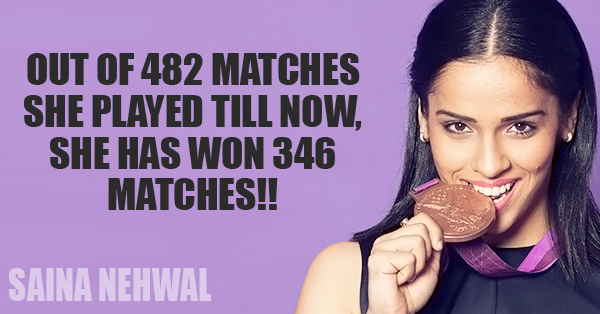 3. Later shifted to Hyderabad with her family.

5. Her parents Harvir Singh and Usha Nehwal were also champions of badminton in Haryana.

6. She has one elder sister- Abu Chandranshu Nehwal.

7. Saina did her XII from St.Anns College Mehdipatnam Hyderabad.

9. She is the first Indian to win a medal in Badminton at the Olympics.

10. She is one of the athletes supported by Olympic Gold Quest. 11. The hardworking girl used to travel 100 km for practice in her early years.

12. She had interest in Karate before entering into Badminton.

13. She holds a brown belt in Karate.

14. She was initially coached by SM Arif and Pullela Gopichand.

17. She is one of the highest paid sportsperson. 18. She holds 14 incredible international titles in her awe-inspiring career.

20. According to rumors, she dated Parupalli Kashyap.

21. In her free time she loves to sketch.

22. She is a big bollywood fan and loves watching movies in her free time. 26. Every time she wins, she treats herself with ice-cream.

27. The 25 years old sportswoman is the first Indian women to be ranked as number one in Badminton World Federation in Women’s Singles category.

28. She has achieved the Bronze medal at the London Olympics 2014.

29. She was the first Indian to win the World Junior Badminton Championship

30. The first Indian to win a Super Series tournament and Indonesian Open in 2009. 34. In 2010, for the first time in the year Saina Nehwal dropped out of the top 10 best performers in the 2010 BWF Super Series rankings.

35. She has defeated world’s best badminton champions like Wang Shixian, Carolina Marin and many more.

40. Singapore is her favorite place.

42. Parathas and Chai made by her mother is her favorite cuisine. 46. She has also been invited on popular Indian television shows as a guest including Satyamev Jayate and Comedy Nights with Kapil.

47. She had signed an endorsement deal worth Rs. 400 million with Rhiti Sports.

49. She is the brand ambassador of Sahara India Pariwar.

50. Her dream is to win Olympic Gold. You Just Can’t Miss Out To Hold At least One Night In These 11 MARVELOUS Hotels Of India
Have A Look At 10 Reasons Why NRI’s Once Leave India, Never Come Back