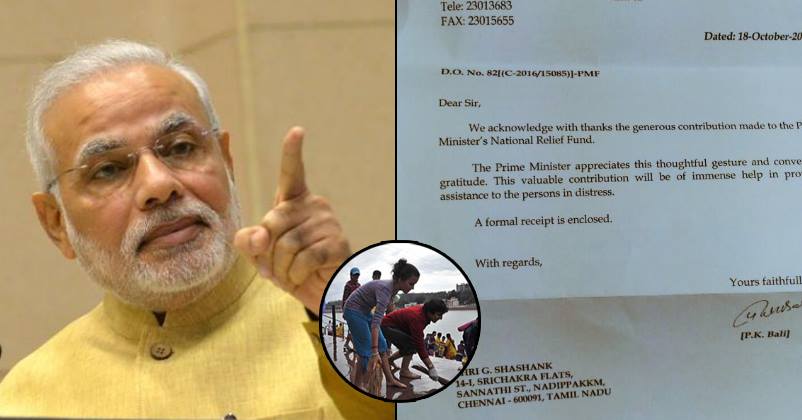 Since the Modi-led government has come to power it is doing a lot for our nation. One of the biggest initiative taken by this government is ‘swachh bharat abhiyan’. PM Modi himself came out on road and took part in this campaign. This initiative made people actively take part in it along with celebrities and other big names.’The river Ganga cleaning process’ is another initiative taken to make our nation clean. This time not only the adults but also a 10-years-old has taken part in this good work.

This 10-year-old, G Shashank from Chennai has sent rupees thousand to our PM Modi to be contributed to the efforts of cleaning the river Ganga. The beautiful thing about this amazing gesture is that the boy has sent that money which he won as the first prize in a school competition.

In his letter to PM Modi, he has made a special request that he wants to contribute this money in the cleaning of river Ganga. He mentioned that he has sent the money to the National Relief Fund because he is keen on doing national work. Dear Sir,
We acknowledge with thanks the Minister’s National Relief Fund.
The Prime Minister appreciates gratitude. This valuable contribution assistance to the persons in distress.
A formal receipt is enclosed.

This class 5 student of DAV school, won a Sanskrit-based competition to clinch the contribution amount and he has mentioned its details in the letter as well.

Modi government launched ‘the Namami Gange project’ worth Rs 20,000 crore to improve the condition of the holy river. River Ganga hosts more than 40% of the country’s population and cleaning it has been on top of the Modi government’s agenda. G Shashank expressed in his letter that river Ganga is the religious river of the country and we should maintain it! He also invited PM Modi to his home in Chennai.

This amazing gesture got a prompt response from the PMO with undersecretary PK Bali, they thanked him and appreciated his contribution. They also wrote that his efforts well acknowledged by the PM and he called it a ‘thoughtful gesture’.

This Bengaluru Water Tanker Driver Won Mr. Asia Title & Proved That Nothing Is Impossible
Forget The Picture, This Video Of Kiwis Going Awww Over Dhoni’s Hummer Is Hilarious !