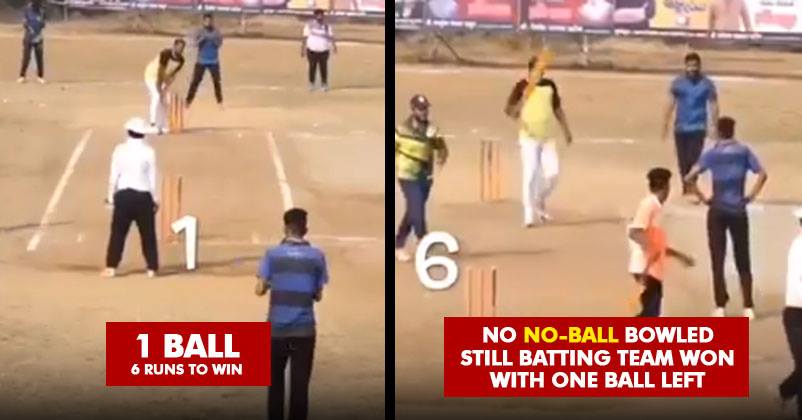 Cricket is a game of unexpected endings.The players have no idea what the next ball will bring.It requires tenacity and hard work.We tend to grow up watching gully cricket,played with great zeal and effort.

Now,cricket in the local tournaments are often popular among the local masses.Where the players and umpires tend to be from your own locality,and so supporting them is your duty as well.

In,this video of a local tournament,the players tend to be excited,very much.They are seen to be focused.But,the match has almost come to it’s end,where a ball will be deciding the ultimate result.

The batsman requires a six from the last ball,to make his team win,which is a huge pressure on his side,but luckily it is the unfortunate bowler who seems to be doing it’s job.

Watch this interesting video to know how.

6 runs needed off 1 ball and the team scored it with 1 ball to spare 😂 pic.twitter.com/XOehccVBzA

So,you just cannot miss this hilarious reactions about it.

This matches are in dombivli i guess… super fun to watch 😅

This was really hilarious 🤣🤣🤣🤣🤣

Amul Posted The Best Congratulatory Message After India’s Win Against Australia,You Cannot Miss It.
Hardik Pandya Apologized For His Comments On Women, But Netizens Are Still Trolling Him