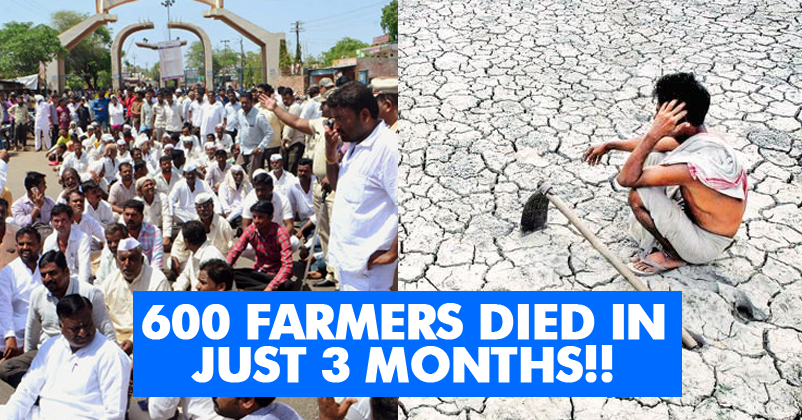 A community that builds up more than half of India’s economy stands helpless today begging for their own basic rights. The opposition, who is now in power, that went out all guns blazing to fight for farmers’ demands is now not even bothering to speak a word on their poor condition. They are knocking almost every door that can help them in some manner. They ate rats, danced naked, and did everything they could just to get themselves heard. Sadly, the situation is only drifting away from improvement. The number of farmer suicides that was supposed to get lowered, has increased by another 42% since 2014. Demonetization, which was expected to strengthen the Indian economy, left the farmer society of India completely shattered. The moneylenders began looting the poor farmers on the pretext of providing instant cash to them. And local moneylenders were not the only villains. As per National Crime Records Bureau’s farmer-suicides data, 2474 of the over 3,000 farmers who committed suicides across the country in 2015 due to debt and bankruptcy, had taken loans from banks or micro-finance institutions.

To fight for themselves, they started protesting. But what happened was even worse. The police fired at the protesting farmers killing many and making things worse for them. The beloved PM Modi was free to condemn the attacks in Manchester but was eventually too busy to even speak a word for the dying farmers back in his own country. Let us just have a look at what exactly the farmers are demanding and what have they got in return so far.

What the farmers are demanding? There are protests going on in different states but all for the same demands with a different magnitude. All they want is a loan waiver, drought relief package and a higher minimum support price. They are demanding 50 percent more profit promised by the Modi-Government during the polls. They have been peacefully protesting in 162 districts of nine states excluding the Mandsaur district in Madhya Pradesh where 5 farmers were shot down by police in a violent affair.

What are they getting in return? The three major states where the protests are on a high scale are Maharashtra, Madhya Pradesh, and Tamil Nadu. In Tamil Nadu, the protests have been called off for two months as CM Palaniswami assured to fulfill their demands in the given period of time.

In Maharashtra, CM Devendra Fadnavis promised a loan waiver for the small farmers who were not a part of the Institutional Credit System. However, that did not calm down the protests as around 80% of the farmers who died, had taken loans from banks or micro-finance institutions. Madhya Pradesh, the worst affected state, is getting nothing but promises. How often do you see a Chief Minister protesting against his own government? With BJP being the ruling party in both state and central government, BJP’s CM Shivraj Singh Chouhan is still protesting for some unknown reason. He even called his protest off saying that the farmers appeared in his dreams and asked him to end the stir. It is high time he stops dreaming and wakes up to face the reality. Also, it seems he has forgotten that now he is the one who is supposed to step up and take some action instead of sitting on a Dharna. To top it all, Shivraj’s Agriculture Minister has ruled out any loan waiver reportedly. So, an end to these Acche Din for farmers is still some time away. At the centre, the usual blame game is still going on with BJP blaming the UPA government and weather for their own failures. Rahul Gandhi is expected to visit the protesting farmers which will only add fuel to the already boiling protests. The horrible execution of demonetization is not regretted either. PM Modi is maintaining his silence on the complete issue.

Farmers are only asking for what they were promised back in 2014 by the Modi government. Acche Din are surely not the days they are going through at the moment. If not anything else, it is high time PM Modi steps up to shoulder the responsibility and assure the farmers that they will get what they deserve. Keeping a mum have only deteriorated things further.

Farmers are continuing with their duty of cultivation as usual but if their demands are not met, they’ll make sure the produce falls prey to the silence of this government. Do let us know your views about these Ache Din in our comments section below.

Why Are Telecom Companies Acting Like Agitating Farmers?
10 Best Cities Of The World To Visit! Check Out If Your City Is In This List!