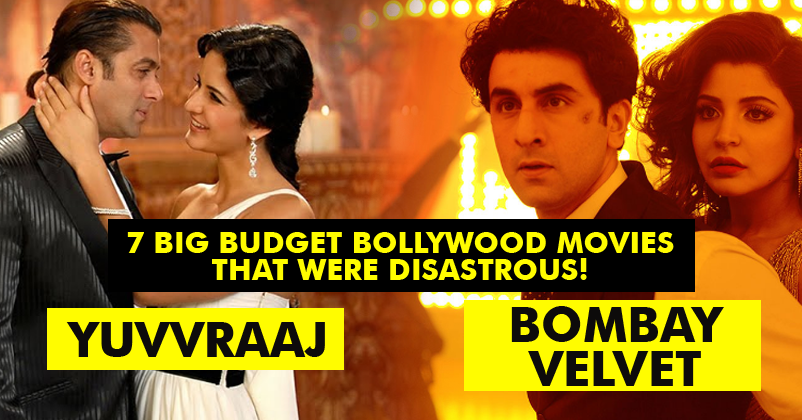 Many times we have seen in Bollywood that even the brilliant directors, big superstars and enormous budgets are not able to save a film from being a flop. Before their release, these movies were hyped and promoted a lot, they were the most awaited movies of that year, but when they hit the theaters, they failed badly. Audiences dismissed the films, they couldn’t leave a mark, they ended up becoming movies with highest loss. Some of these movies are not that bad, they got good reviews from the critics, but they were rejected by the people. These films became a disaster in terms of Box Office Collection.

Even the biggest stars of Bollywood like Hrithik Roshan, Shahrukh Khan, Akshay Kumar had their share of flops. Their films are met with huge expectations. So not only their films must be well-made and entertaining, but it must also perform exceptionally well at the box-office. Producers invest a large amount of money on the films and these films are expected to perform well at the box-office. But when they don’t, it results in a huge loss for the producers. Bollywood has numerous big budget films, films that had a popular star cast, maverick director, but they flopped badly at the box office. These movies couldn’t even return the production cost.

So let’s take a look at 7 Big Budget Bollywood Movies That Were Disastrous! A film directed by a talented director like Anurag Kashyap and starring big names like Ranbir Kapoor, Anushka Sharma, Karan Johar. Although the film received mixed reviews from the critics, performances of Ranbir and Anushka were applauded, but the audiences dismissed the film. Bombay Velvet was made on an enormous budget of Rs. 120 crore, the film could earn only Rs. 22.27 crore in the first week, it suffered a loss of Rs. 100 crore.

This film was initially titled as “Ram Gopal Varma Ki Aag”, but later the name was changed to Aag, the film is a poor remake of the all-time great “Sholay”. Directed by RGV and starring popular names like Amitabh Bachchan, Ajay Devgn, Mohanlal, Sushmita Sen, the film turned out to be one of the biggest Bollywood disasters of all time. Critics called it one of the worst Bollywood films ever made. Fans rejected the film, it was a critical and commercial failure. That’s why you should never touch a classic, forget remaking the all time greats. This film is the perfect reason why you shouldn’t take Abhishek Bachchan in a lead role in a big budget film. This fantasy film featured Abhishek Bachchan as a superhero “Drona”, the film also had popular names like Priyanka Chopra and Kay Kay Menon. 60 VFX experts, 250 visual artists worked on the film for 6 months, but due to a stupid script, poor direction, and awful acting, it bombed. The film was made on a big budget of Rs. 45 crore, but it could not even recover half of its production cost. Drona was panned by the critics and it received a negative response from the fans. This film’s lead actor looked a lot like Hrithik Roshan. The film has a lot of similarities to the 1991 Telugu film Aditya 369. The film was hyped so much, it had VFX teams from Australia and New Zealand for the special effects, the film was supposed to be a dream lunch for Harman Baweja, but it crashed badly. Newcomer Harman due to his similarities with Hrithik ended up with the tage of a Hrithik-lookalike, this film also led to his breakup with his girlfriend Priyanka Chopra and Adlabs suffered a loss of more than Rs. 60 crore. Blue at the time of its release was the most expensive Bollywood movie ever produced with a budget of more than Rs. 112 crore. The film had some amazing underwater shots, expensive action scenes, but it failed to recover its high budget at the box office. The film was made for a whooping budget of Rs. 112 crore, despite of having big names like Akshay Kumar, Sanjay Dutt and a special appearance by Kylie Minogue, the film earned only Rs. 75 crore. A musical story about three brothers who try to deceit each other to inherit the wealth of their deceased father. The production of this star-studded musical film was Rs 50 crore, the film received poor reviews from the critics, and it ended up collecting only Rs. 16 crore at the box office. It was a major flop.