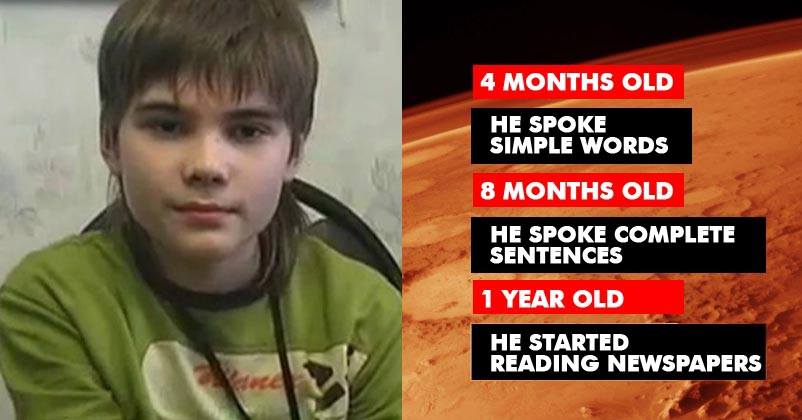 1996 born Russian boy Boris Kipriyanovich (Boriska) came in the attention of world some years back when his claims to be from Mars planet proved to be strong and believable. Boriska started surprising his parents and everyone around ever since he was born. His intellect and observational power was much stronger than observe in our regular life.

Here are 10 revelations and signs by him which proved that he is indeed from another planet. 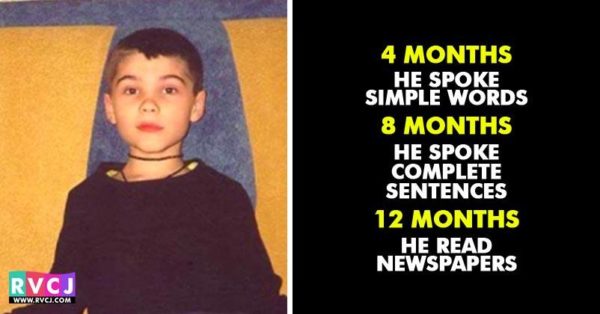 First of all, Boriska’s mother revealed about her experience while giving birth to Boriska. “It all happened so fast I did not even feel any pain. When they showed me the baby, he looked at me with a look of an adult. As a physician, I knew babies eyes can not focus on objects. However, my little baby looked at me with his big brown eyes. ”

By the age of 2, he started giving signs of brilliant intelligence, language skills and unique memory. As soon as he was 3, he started talking about the universe with parents.

Without any reference or reading any kind of book, he was able to name all planets, their satellites, name and number of galaxies which was scary for his parents at first.

2. Early Interest In The Universe 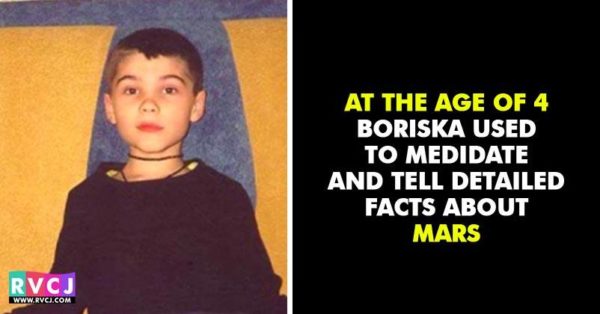 At the age of 4, Boriska started visiting a well-known anomalous zone i.e. Medvedetskaya Gryada Mountain in his town. He used to visit there to revive and refresh himself from the world.

Boriska gained maturity very quickly and at such a small age, he used to meditate and learn from out worldly sources so easily. This left his parents amazed and confused. His mother narrated that nobody taught Boriska to meditate, while they often saw him, sit in a Lotus position and describe detailed facts about Mars and its civilisations.

3. His Life On Mars In Previous Birth 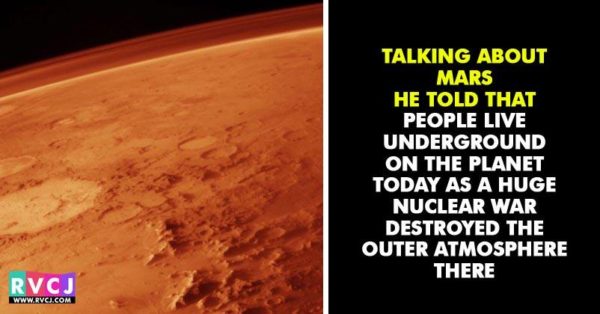 Boriska talked about how he used to live on Mars in his past life. He shared great information about the planet and how advanced the technology was there. He told that they were able to travel through galaxies and he himself visited earth several times during the Lemurian Civilisation. He claimed to have developed an aircraft himself while he used to live on Mars.

He talked about multi-dimension travel and reaching earth within moments.

“We took off and landed on Earth almost momentarily!” he said

Picking up the chalk he began drawing an oval object on a blackboard.

“It consists of six layers,” he said. 25%-outer layer, made of durable metal, 30%-second layer made of something similar to rubber, the third layer comprises 30%-once again metal. The final 4% is composed of a special magnetic layer. “If we are to charge this magnetic layer with energy, those machines will be able to fly anywhere in the Universe.”

4. Information about the end of The Lemurians and his connection with it 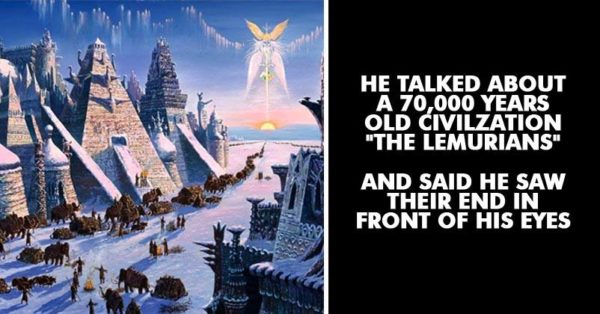 Talking about how The Lemurians perished, he told that they had stopped evolving on the spiritual aspect and hence they perished. He even said that he had a friend on Earth in that time and how he saw him dying when the civilisation came to an end.

“A major catastrophe took place on earth. A gigantic continent was consumed by stormy waters. Then suddenly, a massive rock fell on a construction. My friend was there, tells Boriska. I could not save him. We are destined to meet some time in this life.”

When Boriska’s parents searched for it they found that The Lemurians used to live 70,000 years earlier on Earth and wondered how Boriska came to know so much about them. Boriska told that he knows about the civilisation because he himself has seen them. Talking about Mars he told that people live underground on the planet today as a huge nuclear war destroyed the outer atmosphere there.

5. Secret behind failure of early Mars Missions of Earth 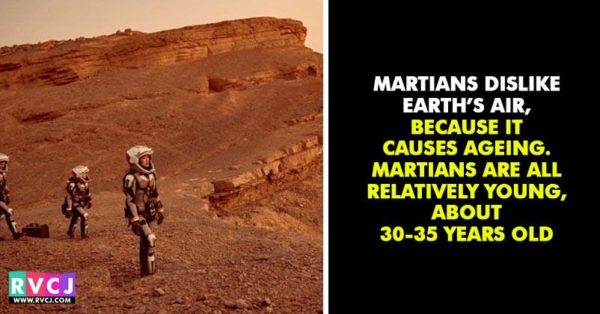 When scientists asked him, why our space stations get crashed before reaching the atmosphere of Mars, he told that the spacestations emit radiations that are harmful to the Mars environment and people. The spaceships are destroyed by the special signals emitted by Martians in order to save themselves.

Acknowledging what he said as true, the scientist said-

“I was amazed by his knowledge of this sort of radiation “Fabos”. This is absolutely true. Back in 1988 a resident of Volzhsky, Yuri Lushnichenko, a man with extrasensory powers attempted to warn Soviet leaders about the inevitable crash of the first Soviet space stations “Fobos-1” and “Fobos-2”. He also mentioned this sort of craft was “unfamiliar” and harmful for the planet due to onboard radiation. Obviously, no one believed him then.”

He also told that people on Mars inhale some other gas to live.

Talking about breathing oxygen here he said, Once you are in this body, you have to breathe oxygen. However, Martians dislike this air, Earth’s air, because it causes ageing. Martians are all relatively young, about 30-35 years old. The amount of such Martian children will increase annually.

6. The Great Pyramid Of Giza 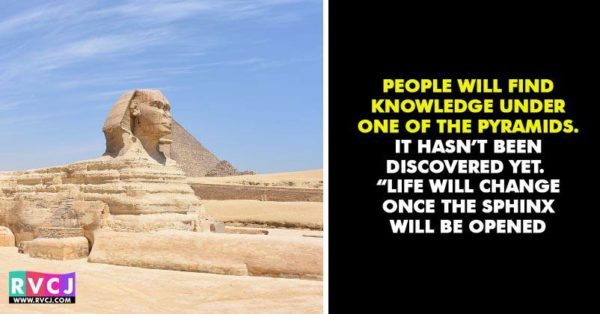 He told that scientists on earth are trying hard to find the mystery of the Great Pyramid Of Giza but they won’t be able to find anything until they locate another pyramid which is still unlocated.

Boriska stated that people will find knowledge under one of the pyramids (not the pyramid of Cheops). It hasn’t been discovered yet. “Life will change once the Sphinx will be opened,” said he and added that the great Sphinx has an opening mechanism somewhere behind his ear (but he does not remember where exactly). 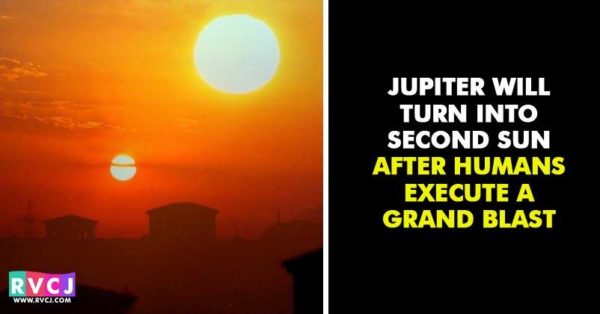 Boriska also foretold that, Humans on earth will use a capsule to execute a grand blast on Jupiter in future which will turn it into a second sun. Interestingly, this prediction was also done by Bulgarian clairvoyant Baba Vanga.

Continue Reading
You may also like...
Related Topics:Boriska, Mars

Shirish Trolled By Wife Farah After Sharing A Childhood Post! He Hilariously Trolled Her Back!
Woman Called Khalsa Aid A Terrorist Organization! They Had The Best Response!