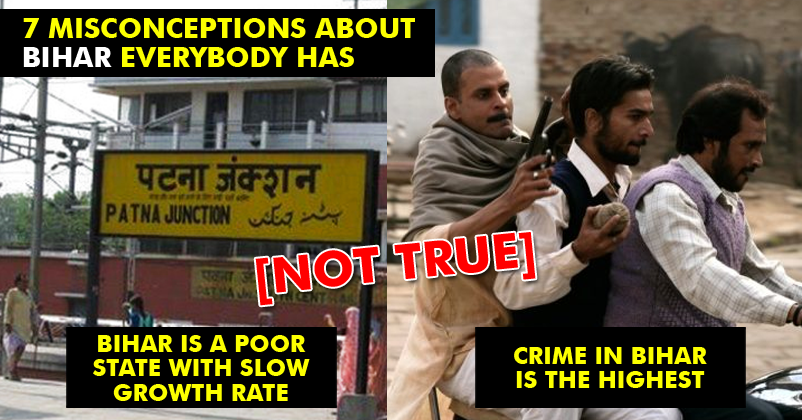 When it comes to stereotyping people from a certain region, we Indians remain a notch above everyone else. People from the southern states stereotype the northern people, the ones from the western states have a biased mindset about the ones from the east. People from each and every state thinks differently about other state’s people. There is nothing wrong in having your own fixed view about a group of people but it is completely wrong to have your views based on a few misconceptions. Bihar, one of India’s largest states is often considered India’s most undeveloped state. People from Bihar are mostly looked on as some other countrymen. This particular negative view however is mostly based on a few misconceptions. Bihar and Biharis are not what we think about them. They are nowhere being underdeveloped or illiterate now. They are moving on and growing in the right direction. Here are seven of the most common misconceptions about Bihar and Biharis that we have tried to debunk. Biharis speak a lot many languages including Hindi, Urdu, Bhojpuri, Maithili , Magahi , Bajjika and Angika. The two official languages of Bihar are Hindi and Urdu. Of the other local languages including Bhojpuri, Maithili is the only language officially accepted by the government. So, it is indeed a misconception that Bhojpuri is all what Biharis know! Maithili and Magahi are spoken by the Bihari masses ever since Bihar became civilized.

2. Bihar Is An Illiterate State Yes it is the state with lowest literacy rate but Bihar is not illiterate now as it used to be a couple of decades ago. Bihar’s growth rate in literacy is the highest amongst all Indian states. From 2001 to 2011, Bihar’s literacy rate grew from 47.52% to 63.82%, making it the state with the highest growth rate. According to a survey, Biharis have a better receptivity than any other state of what their teachers teach them.

3. Biharis and UPites Are The Same Mostly when speaking of north Indians, people refer Biharis and UPites as the same. But, UP and Bihar are in every sense completely different. Their language, culture and history are all contrastingly different from each other. Yes Biharis have a peculiar accent of their own but when it comes to oration, Biharis are as good as anyone else. Bihar has been home to legendary poets like Bhikhari Thakur, Ramdhari Singh Dinkar and Gopal Singh Nepali. Bihar also boasts of one of the finest ICSE schools in India. Most of the genuine literate Biharis speak english as fluently as one could ever imagine.

5. Bihar Is The Crime Hub Of India Yes there is a lot of crime in Bihar but now the crime rate has curbed down significantly. Bihar ranks 19th in the list of cognizable crime rate per 100,000 people. Just like any other state, Bihar too has a few anti-social groups which now get answered equally by the Bihar police. It is usually believed that Biharis have some internal connections within the government which is why they are the ones placed almost everywhere. Bihar is the state with higest number of IAS officers and Gold Medalist Doctors in the whole nation. That stat is quite enough to debunk this misconception. Whatever Biharis are or whatever Biharis get is all because of their own hardwork and not because of some internal conspiracy. Biharis don’t steal it, they earn it! Bihar’s GDP state rank is 12th, obviously better than many other states including Punjab and Kerala. In 2008, Patna had a per capita income greater than that of Bangalore or Hyderabad. Bihar’s major asset is its young human force and thus its economy is heavily based on services and is growing in every other field too.

India has always stood for its unity in diversity and Bihar is no different. It is high time we stop stereotyping Biharis and accept them to be as good as any other fellow Indian. You can freely add more misconceptions and facts to debunk them in the comments section below.

“I Was Never An Aamir Khan Fan,” Sanya Aka Babita Speaks Up About Her ‘Dangal’ Experience
Government’s New National Anthem Guidelines For Disables Has Left Them Agitated