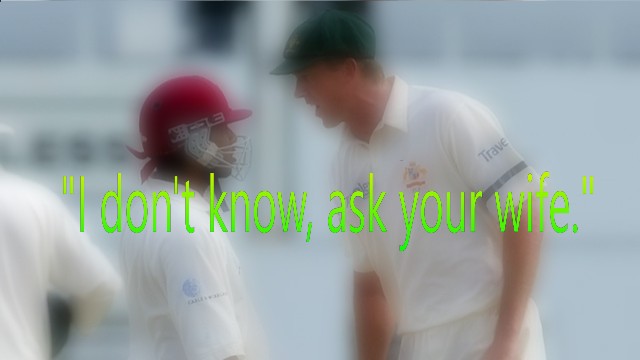 Sledging – most of us are familiar with this word I think. We’re mostly Indians here and cricket is our religion. And sledging is somewhat a daily-used word in cricket. Though Australia and England used to sledge other teams the most but nowadays every cricket team in the world use sledging to make the opponent angry. Today we’ll have a look at the most epic sledging in cricket history.

In fourth test of Australia vs West Indies in Antigua in 2003, McGrath said to Sarwan, “What does Brian Lara’s d**k taste like?” And Sarwan replied, “I don’t know, ask your wife.” McGrath’s wife was very ill then so he got angry and said, ““If you ever mention my wife again, I’ll f****g rip your f****g throat out”.

In one of his early matches against Pakistan after he made his debut against Pakistan, he scored two sixes from a over by Mustaq Ahmed. Then Qadir said to Sachin, “Bachchon ko kyun mar rahe ho? Hamein maar ke dikhao.” Sachin did reply to his sledging but not by using abusive language. Sachin just then hit four sixes and one four in the next over by Qadir.

They are both great players. But they got themselves involved in sledging too. When Ricky Ponting got beaten by some deliveries by Pollock, Pollock said to Ponting, “Its red round and weighs about five ounces.” And then Ricky Ponting hit a four on the next ball and immediately went to Pollock and said, “You know what it looks like, now go find it.”

When Ormond came to bat, Mark said to him, “What the f**k are you doing out here? Surely you’re not good enough to play for England?”. To this Ormond replied, “Maybe not. But at least I’m the best player in my family.” Ormond said that to Mark to remind him of his brother, Steve Waugh.

Mike Whitney came to the field as a substitute and then Ravi Shastri took a single by hitting the ball to Whitney. After this Whitney said to him, “Stay in your crease or I’ll break your f*****g head.” Shastri replied by saying, “If you could bowl as well as you talk, you wouldn’t be the f*****g 12th man.”

In a test between England and Pakistan, Frank Tyson(Eng) got an outside edge of a Pakistani batsmen but Raman Subba Row(Eng) missed the catch while fielding at the 1st slip and the ball went through his legs. And Raman said to Frank, “Sorry, I should’ve closed my legs.” Frank replied, “Not you son, your moth*r should have .”

Eddo is a Zimbabwe bowler. McGrath was bowling to Eddo and Eddo was somehow managing to stay at the crease  and this frustrated McGrath very much and he said to Eddo, “Why are you so fat?”. To this Eddo replied, “Because every time I m*ke lo*e to your wife, she gives me a biscuit .”

So which one’s your absolute favorite?