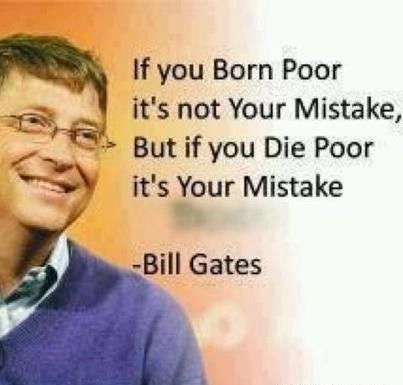 1. He is not a college graduate. Bill Gates never completed his college studies. Instead of completing his studies, he founded Microsoft with his friend Paul Allen in 1975, at the age of just 20. Bill Gates, the founder of world’s biggest software company – Microsoft  was arrested in New Mexico in 1977 for allegedly jumping a red light and driving without a licence.

3. The Richest Man On The Earth Its is said that if he drops a thousand dollars note, he won’t even bother to pick it up. Because in  those 4 seconds in which he will pick them up, he would will probably already earn it back.

If he donates US$ 15 to everyone on this earth, he will still be left with US$ 5 Million.

5. This is how Bill Gates can get bankrupt. Big Gates is the man who has topped this list and has been at same position for 15 of the last 20 years. He has a net worth of $76 billion, 4 times the net worth of Mukesh Ambani.

7. This is how he can spend his money It is assumed that if Bill Gates lives for another 35 years, then he will have to spend US$ 6.78 Million per day to finish all his money he has before he goes to heaven.

With the money he has, Bill Gates can pay off the entire United States debt in less than 10 years.

Continue Reading
You may also like...
Related Topics:Bill Gates